TRG finds its Rhythm at The Roar Before the 24 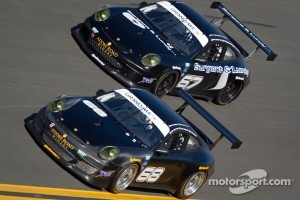 Petaluma, CA (January 11th, 2012) - TRG's five-car armada for the 50th Anniversary of the Rolex 24 at Daytona showed it's cards at the The Roar Before the 24 held this weekend at Daytona International Speedway. Consistently landing at or near the top of the time sheets, the team feels strong and confident heading into the famous 24 hour race.

Led by last year's pole sitting No. 66 Porsche 911 GT3 Cup car, as well as last years winning GT Entry, TRG posted some of the quickest times of the weekend in GT class which will be marked by 44 entries for this year's race, a field which is arguably one of the most competitive GT fields of all-time.

"The test was great, we had a lot that we wanted to accomplish; getting drivers in the car, trying new things and testing parts. I think we came to the end of the three days feeling good about what we got done. I am looking forward to the race, our cars are ready, our drivers are ready, all-in-all it couldn't have been better." said Pumpelly.

"All our guys did fantastic job this weekend," stated team owner Kevin Buckler, going for his fifth win this year at the Rolex 24. "The main goal was to get everyone comfortable with their cars, play with some of the setups, and see what type of issues came up. While test weekend is never flawless for anyone, I must say that these Porsches will be ready for 24 hours come green flag... and our team, we couldn't ask for better guys- we're ready!"

TRG's famous No. 66 car, driven by Dominik Farnbacher, Mario Farnbacher, Ben Keating, Patrick Pilet and Allan Simonsen was very quick out of the box. Testing different setups, the 66 remained quick throughout the test.

"The test went great, I was driving two cars, moving in-between both. The cars are different, but both were fast. Kevin has put together a great group of drivers and I love all of my teammates. I think this is the most competitive that I've ever seen this race in the GT field but we've got a great chance in both cars. I really feel TRG has an advantage heading into the 24."

"The test is going really well for us." Stated Gomez. "TRG is the right team to be with; I have great teammates and the car is perfect. We started with a great platform and we've been developing and trying new stuff from that. I am very confident in our car and our lineup and really looking forward to my first 24."

All TRG cars turned laps very competitive laps. Driving in the No. 64 car are former Formula One driver Eliseo Salazar, Gaetano Ardagna, Eduardo Costabel, and Emilio DiGuida. Not only is this an all Latin car, but Salazar looks to make history being the only driver to compete in the Rolex 24, Le Mans, Dakar Rally and Formula One Monaco.

"We feel very comfortable with the car, this was a very telling test. I've been driving rally for the past few years, so it took a little while, but once I got in a rhythm things went really well. We have a full latin car, which is great. With 44 cars in this GT field, anything in the top 10 would be great!"

The No. 65 car had the pace throughout the test preparing for the gruelling endurance race. It will be manned by first time Daytona 24 drivers Jack McCarthy and Mike Hedlund, who will be driving alongside Daytona veterans Jim Michaelian and Bob Doyle.

"It's great to be with the TRG team, Kevin is obviously one of the senior players here in GRAND-AM and it's wonderful to be a part of that." Said TRG newcomer Jack McCarthy. "It's phenomenal to have five cars; to be able to trade data, ideas, track experience, etc. across all of the teams. I’m very excited to be a part of TRG and looking forward to the race."

What other TRG drivers said about The Roar and the upcoming Rolex 24:

"The test has been great - we've spent the last few days, throwing everything we have at the car and have come up with a good plan for the race. I couldn't ask for a better group of guys. Also, coming back to the 24 as defending champions is really something special. I'm really looking forward to hitting the track at the end of the month!"

"I'm pretty pleased with how the test progressed. It's (2012 Porsche 911 GT3 Cup) a new car and with the new tires, you have to run these tests to see what directions you have to go. We are lucky to have so many different cars that we can take in different directions. Now, the engineers have to get together and figure out which direction is the right one. I’m very happy, we have a great car and driver lineup. It will be a very tough race though, this may be the best driver lineup ever here. We are expecting a sprint race from the beginning to the end."