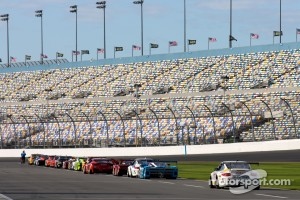 Cars wait to go on track

Nineteen Rolex Series cars – eight Daytona Prototypes and 11 from the production-based GT class – are entered for two full days of on-track activities. This will be the last open test before the Roar Before the Rolex 24 on Jan. 4-6, 2013, the final official test for the Rolex Series before the season-opening 51st Rolex 24 At Daytona during the Jan. 24-27 weekend.

Defending Rolex 24 winners Michael Shank Racing will be joined by GAINSCO/Bob Stallings Racing, Action Express Racing, Wayne Taylor Racing and Spirit of Daytona from the DP ranks. They will be joined by Team Sahlen, which will be having its first open test with its two new BMW/Rileys.

Action Express will have a second car, a Porsche/Riley, for Sunoco Rolex 24 At Daytona Challenge winner Ivan Bellarosa and his driver-coach, Max Papis. An American Le Mans Series P2 fielded by Conquest Racing is also expected to provide data as an initial step in evaluating the potential class structure of a unified series in 2014.

Plowman steps into the future at Daytona testing

Saavedra is hoping to win in Toronto