Unfortunately, the No. 01 Chip Ganassi Racing with Felix Sabates BMW Riley of Scott Pruett and Memo Rojas had the shortest race of their long career.

Dane Cameron and Wayne Nonnamaker, driving the No. 42 Team Sahlen BMW Riley, finished fourth at the end of the two-hour race at the 2.36-mile, 13-turn temporary street circuit on Detroit’s Belle Isle. 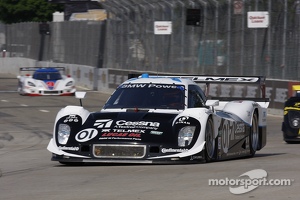 The No. 43 Team Sahlen BMW Riley of Joe and Will Nonnamaker finished ninth. The double top-10 finishes were a season’s best result for Team Sahlen who moved up to the Daytona Prototype ranks this season.

Dane Cameron, finishing the race in the No. 42 machine, was fourth when the race went green after the third caution period of the race with just nine minutes remaining.

He charged up to second, but a small mistake dropped him back to fourth.

Cameron said, “Both Team Sahlen and I had never driven a Daytona Prototype on a street circuit before yesterday so we did not know what to expect. We’ve been pleasantly surprised by our pace and, at the end, I radioed to the team that I thought we had enough to go for the podium.

I got a good restart and managed to force my way to second. I made a slight mistake and gave Joao (Barbosa) a bit more room than I should have and was shuffled back to fourth. Team Sahlen has made great progress so far this year and it was great to be able to fight at the front of the field.”

Unfortunately, the No. 01 Chip Ganassi Racing with Felix Sabates BMW Riley of Scott Pruett and Memo Rojas had the shortest race of their long career. Rojas, starting from the seventh position, was driven into the turn five wall just after the green flag waved by one competitor and then driven into by another to take the three-time champions out of the race. The duo entered the GRAND-AM 200 with a seven point lead in driver points, but fell to fourth.

The GT class BMW M3s of Turner Motorsport also had a disappointing day. The No. 93 M3 of Michael Marsal and Gunter Schaldach finished eighth, one lap down from the leaders. The No. 94 machine of Bill Auberlen and Paul Dalla Lana retired from the race on lap 32 after contact with the wall.

“Congratulations to Team Sahlen,” said Gordon McDonnell, BMWNA Motorsport Manager. “They have shown good progress in their first year in Daytona Prototype and I believe we’ll see them on the podium soon. It was certainly a tough day for CGR but we are glad Memo is ok (after that dramatic impact). The 01 car will be back and it will be exciting to watch Scott and Memo race hard to climb back to the top as we head towards the second half of the season.”

Next up for BMW drivers in both the Rolex and Continental Series are the races at the Mid-Ohio Sports Car Course on June 15. The Rolex race will be televised live on SPEED at 4:30 ET. The Continental race will be broadcast on Sunday, June 23 at 4:00 p.m. ET.