Wayne Taylor Racing, Action Express Racing and Spirit of Daytona drivers give their thoughts on the 51st Rolex 24 at Daytona.

TELL ME WHAT THIS FINISH MEANS TO YOU TODAY: “Just representing Team Chevy it’s such a big deal for me. When I think I have been in America for 22 years and when I first came here I drove for Jim Miller who is now Pratt and Miller. My program manager when I was driving at that time was Mark Kent (Director of Chevrolet Racing). In 1991, when Jordan (Taylor, son) was born we were racing at Lime Rock (Park) and Jim Miller said to me ‘I’ll have a plane for you because Shelly (Taylor, wife) was pregnant with Jordan and now all this time later he is in this car, with this team, with Mark Kent and everybody. I’m happy. I wanted to win so bad for Team Chevy just so much and Velocity Worldwide and everybody. I’m really happy. I’m relieved I guess you know. I was not prepared to not be the face of Team Chevy with my team. I know there are a lot of teams but I wanted to be the one.” 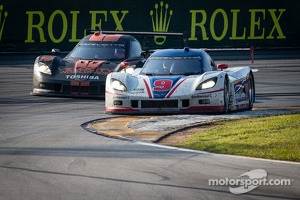 WE’VE GOTTEN SO USED TO SEEING THE EMOTIONS ON YOUR FACE. ONCE AGAIN TODAY, WE JUST SAW YOU FILLED WITH EMOTIONS. IS IT TOUGH TO SEE THIS TEAM AND WHAT HAPPENS? OR ARE YOU AT LEAST KIND OF HAPPY AFTER LAST YEAR GETTING OUT IN THE FIRST 30 MINUTES OF THE RACE? AT LEAST YOU’RE STARTING OUT THE SEASON STRONG. “I’m really happy. Coming into the season we’ve all been excited with this new car partnership and Team Chevy and I think Ryan Hunter-Reay, winning the championship last year and driving with me back in 2006, coming with us. Max (Angelelli) of course is my family and part of everything, and then Jordan (Taylor) coming on board this year, there was so much expectation. And there was so much drama coming into this race with horsepower and this and that. In the end, I felt that this team did more than anybody else. I don’t remember one pit stop that we didn’t beat everybody. And everybody just executed perfectly and we were just about there.”

WHEN JUAN PABLO MONTOYA WENT BY YOU, YOU STILL DIDN’T GIVE-UP THE FIGHT? “No, never, never; I told everybody on that team I would never give up, and they know me. But look, this is the Velocity Worldwide team. They made an effort, not me. They made an effort with pit stops and strategy, just absolutely perfect. So, it’s their win.”

TALK ABOUT THE FINISH TODAY AND THE RACE: “I guess we were the best of the rest you could say. Ganassi was somewhat in a class of their own. The team did a great job. We didn’t have one mechanical problem the entire race. We never had to do anything in the garage it was just fuel, tires, driver changes and that was it. Everyone executed the race; it was just unfortunate the way the cars were going that is where we ended up. You’ve got to be proud of everyone. Looking at the long run we are in a championship here so second-place points is not a bad place to start.”

RUNNING YOUR FIRST RACE THIS SUCCESSFULLY WITH YOUR DAD WHAT DOES THAT MEAN TO YOU? “Of course it’s special, it’s cool to have him on the stand and hearing him give feedback. It was special. It would have been great to win it with him, but hopefully we can do that another day.”

ON THE RACE: “Excellent job, excellent team effort by everybody involved. Team Chevy, Wayne Taylor Racing, the preparation was second to none. We had a phenomenal race really when you look at how it all went. No mistakes, never went to the garage, never a hiccup, had great pace. We were struggling a little bit on some of the regulations with power. We had a little bit of a disadvantage there that we had to work against.”

YOU HAD A DISAPPOINTING END TO A REALLY SOLID DAY WHAT ARE YOUR THOUGHTS ON THE RACE? “It’s very frustrating. We did the race we had to do. We drove clean, we had no problems and the car was getting better every time. Unfortunately, it was a terrible call in my view. Deciding a race like this is a shame. Obviously, I have to congratulate Scott (Pruett) he did a good job in the Ganassi car. They had the edge on everybody for sure this year. I think for sure we could be on the podium, an easy podium. I think we were very able to do that and we deserve that. Unfortunately, it was just the call. I think they are trying to make it like Ganassi and Allmendinger show, but everybody is there to fight for position. You have to know when you can go and when you can’t. I mean he was obviously outside the track, not in a position to take the corner. He could have just lifted and try again, but GRAND-AM did the call that they did. We are learning and next race we will try again.”

WHAT ARE YOUR THOUGHTS ON THE RACE AS A WHOLE AND HOW DID YOUR 24 HOURS GO? “I never thought I would say a top-five finish at Daytona would be as disappointing as it feels right now. It is a bit disappointing. With that being said my first race as a full-time driver for Action Express was just so exciting. I’ve got two of the best drivers in the world as my teammates this weekend. It was so great to work with them and to push hard every stint to keep the car running. I’m so excited to be a part of this organization and be representing the Bowtie. I even had a chance to give one of the Corvette engineers a ride around before the race. That was really exciting to meet a guy who is designing the street product and give him a ride and give him a little insight into what we do here at the track. Overall, it’s a great start to the season. It’s great points, it’s a top five, but man that penalty hurt. I have to say tonight it’s a little bitter sweet, but I’m also thrilled to be a part of this team.”

TELL ME ABOUT YOUR RACE: “It was a long one, not just because it was a 24 hours. Just initially a few minor issues like some electronics we ran into. At one point I ran blind in one of my stints. I had no radio, no telemetry, no shift lights, even with that the car was good. Overnight we fixed all of that got back on the lead lap. At some point we were actually, probably not fighting for the win, because I think there were two cars here like they have us covered. A bit too much I have to say. I mean we just kept it there all race long until two hours to go. I was placed fifth at that time. I was feeling great, starting to put some pressure on the No. 60 car and I think by then I think we had the pace to fight for second-place. All of a sudden the exhaust just gave up. We lost all the headers, the exhaust, so we lost power, torque, everything. So from that point on we were on the lead lap, but we couldn’t fight. We just stayed around, kept running laps. It is good run for the Spirit of Daytona team for the championship.”

TALK A LITTLE BIT ABOUT YOUR RACE: “We were on target after about 2:30-3:00 o’clock in the morning. Exactly where we had planned for, unfortunately, Nelson (Piquet Jr.) had a small off coming out of the pits. That broke our rear suspension and we lost 20, 22 laps with that. That was the end of the race for us. But, things happen I guess. He did it, (Jamie) McMurray did it and Jeff Gordon did it, so at least he is in good company (laughs). When you are running with this caliber of guys like in the car and you are pushing wide open all the time. Our main goal here was to try and beat the Ganassi (cars) so we were doing like qualifying laps one after the other and it happened. It’s a shame now I guess from that point on I was already on a 364 day countdown for next year.”

TALK ABOUT YOUR EXPERIENCE AT THE ROLEX 24 HOURS AT DAYTONA THIS WEEKEND: “It was a fantastic race. Obviously, I did a silly mistake leaving the pits. It was obviously 5:00 am in the morning, new tires, one of those things. I touched the wall barely at the exit and it was enough to bend our rear suspension. We had to come in and change it. It took a bit longer than we expected. It is a shame. First, I need to say sorry to all my teammates Christian (Fittapaldi), Felipe Nasr and Brian Frisselle. Thanks to the team for the invitation it was a great experience. Obviously, I’m going to be back over here in a couple of weeks with NASCAR, but it was a good start of the year for sure.”