Alex Tagliani is one of the most revered French-Canadian drivers of the current generation of racers, but he won’t have any time to enjoy the adulation of his countrymen this weekend as the Grand-Am Rolex Series and the NASCAR Nationwide Series head to Montreal’s famed Circuit Gilles Villeneuve this weekend.

Tagliani not only will be competing in both the NASCAR and Grand-Am races, but he will be undertaking the rare feat of driving two different Grand-Am cars in the same race. The chance to run three different cars in two series is a Herculean task under the best of conditions, but for Tagliani the degree of difficulty will be ratcheted up by the fact that this weekend will be the Canadian’s first-ever event in a Grand-Am Daytona Prototype.

I'm definitely very excited to do it in Montreal.

The regular driver for Bryan Herta Autosport in the IZOD Indy Car Series, Tagliani will compete in both Starworks Grand-Am cars, starting the race as a partner with Ryan Dalziel and finishing in the team’s sister car alongside Alex Popow.

“It will be my first opportunity to drive a DP car, so I asked a bunch of questions to the guys that have driven those type of cars, and I've looked at the schedule. There is quite a bit of track time as well to get used to it,” Tagliani said. “But mainly the role is to do a good job for the team. I know there is a championship at stake, and I'll try to support Ryan the best I can, and then take over the car from Alex.”

The Starworks team found itself in the tough position of needing a replacement for Enzo Potolicchio after he resigned from the team in protest against Grand-Am officiating inconsistencies, and tabbed Tagliani after its normal replacement Sebastien Bourdais was unavailable due to his own Indy Car obligations.

“I spoke with Peter (Baron) a while back, and obviously I know Ryan very well and I know the team during the Indianapolis race and obviously with what happened after that, there was a possibility for me to join the team with Ryan,” continued Tagliani. “But also Bourdais was not able to make it in Montreal because he's testing in Sonoma with pretty much every other team in IndyCar there, but I'm not making that test, so I was available. The team started to register me for both cars. But it happened pretty late.” 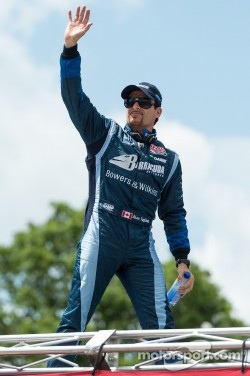 Alex Tagliani at the Detroit IndyCar race on Belle Isle in June, 2012

A 13-year veteran of the open-wheel wars, Tagliani has his eyes on a number of different directions for his career, which is why he felt he needed to use this opportunity to get on the radar of teams in both the Grand-Am and NASCAR series.

“It's tough to dilute your focus and your program over a weekend with two different categories, but chances like this to try a DP car don't happen very often, so I didn't want to say no,” he reported. “I'm talking to various different people that know the NASCAR world, and starting to get in in different ways, but it's tough. I won't lie. The wish is there. I would definitely like to try to make the jump (to NASCAR) more seriously.”

Tagliani watched with great interest when his fellow countryman Paul Tracy tried to make the jump to stock cars in 2005, and it was about that time when he started harboring similar aspirations. But the tough times suffered by drivers like Tracy, Dario Franchitti, Michel Jourdain Jr., Sam Hornish Jr. and A.J. Allmendinger that have tried to make the jump has kept Tagliani from abandoning Indy Car racing totally for a shot at NASCAR.

“I would have made the jump a long time ago and not really full-time right away but to pay your dues and to learn,” Tagliani mused. “Those cars are really difficult to drive, and you need to allow yourself a period of adaptation. I would have loved to make a more settled condition and having progressed into NASCAR by now, but it's not easy to get in. People have a tendency not to fully be comfortable with an open-wheel driver or give you a chance. So, yeah, it's been like something inside of me that I wanted to do for a long time, and I'm definitely very excited to do it in Montreal, especially.”

Tracy will enjoy racing the Action Express Corvette in Montreal