This Victory Is Solid as a (Lime) Rock

Is it possible time has stood still in the lush, green hills of northwest Connecticut since Memorial Day 2010? That was when the SunTrust Racing driving duo of Max Angelelli and Ricky Taylor previously visited Lime Rock Park in Lakeville, Conn., and scored their first GRAND-AM Rolex Sports Car Series victory of the season in dominating fashion by leading three times for a race-high 95 of 174 laps.

Monday, it was déjà vu all over again, in the words of the immortal Yogi Berra, as Angelelli and Taylor made it look easy, once again, in scoring their second consecutive Memorial Day Classic victory at Lime Rock in even more convincing fashion, starting from the pole and leading three times for 153 of 183 race laps. 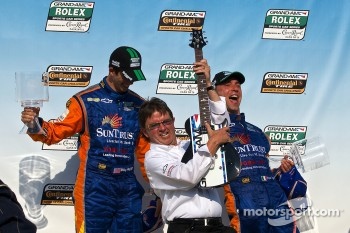 Not to go unmentioned, of course, is the fact Angelelli and Taylor’s chief nemeses, defending series champions Scott Pruett and Memo Rojas, were once again out of the race in the early going in their No. 01 Chip Ganassi Racing with Felix Sabates BMW Riley, just like they were in 2010.

That certainly helped set the stage for the veteran Angelelli’s and sponsor SunTrust’s 16th Rolex Series win since they first joined forces in 2004, and the second for the 21-year-old Taylor, who started the day by capturing his third career Rolex Series pole position in the No. 10 SunTrust Chevrolet Dallara of Wayne Taylor Racing.

“We made a major change over the winter in restructuring our engineering department and they really deserve this,” Angelelli said. “We have two really good guys who have been in charge of our engineering department since Daytona – Brian (Pillar) and Adam (Banet). Those two, as well as everybody else on the team, did an excellent job today, and it’s definitely not the first time since we started the season at Daytona. So, I am really pleased to reward them with this win.”

Asked in post-race interviews why the SunTrust team has been so dominant in the first two visits to the fast but tiny, 1.5-mile, seven-turn natural road course by the Rolex Series Daytona Prototypes in 2010 and 2011, Angelelli did not hesitate to admit the Ganassi team’s misfortunes were a factor.

“We had an excellent car and I think we could have won, anyway, but with them being out, that made all of our lives easier,” Angelelli said. “It’s a lot easier to race without the 01 around, I can tell you. They are on another planet. It’s easier, we can enjoy ourselves, and we can see different winners. We had a good car last year, too, but we also had a little bit of luck because the 01 and the 99 (Gainsco/Bob Stallings Racing Chevrolet Riley) – two really strong, fast cars – were out on the first lap. This year, the 01 was out early, and a lot happened again with the 99 and the 90 (Spirit of Daytona Chevrolet Coyote), with the heat affecting their drivers. Still, I think we could have won today with how fast the SunTrust car was.”

Taylor, whose 20-year-old brother Jordan scored his first career Rolex Series win two weekends ago in a GT-class Chevrolet Camaro at Virginia International Raceway (VIR) in Alton, one-upped his younger sibling today after a thoroughly dominating performance in qualifying and his opening race stint, and Angelelli closed the deal by keeping the field behind him during the final two hours of today’s two-hour, 45-minute event.

“It was a pretty crazy day.

From his pole starting position, Taylor did some nifty driving into the fast, sweeping right-hand turn one at the end of the long front straight to ward off an aggressive but expected opening challenge from Rojas in the No. 01 Ganassi car. By the time the field returned to the start-finish line for the first time, Taylor had a 10-car cushion on Rojas and, from there, he never looked back in leading all 46 laps he drove today.

Mere seconds before the 45-minute mandatory first pit stop window, Taylor brought the SunTrust car into the pits for tires, fuel and a driver change. During his opening stint, he opened up several leads of more than 20 seconds on the rest of the field. Also during his opening stint, at the 18-minute mark, Rojas and the No. 01 car got tangled up in GT traffic and was forced over curbing in the high-speed chicane on the back side of the track and ventured off course, causing heavy damage to the left-front of the Ganassi machine that took several laps to repair.

“It was a pretty crazy day,” said Taylor, who scored his first two career Rolex Series poles in 2010 at Barber Motorsports Park in Birmingham, Ala., and at Daytona (Fla.) International Speedway. “It started off raining and we weren’t sure how the car was going to unload off the trailer. The engineers made some educated decisions based on what we’ve seen throughout the season as a general trend with the Continental tire and, man, they hit the nail right on the head. The car was so easy to drive which, around a place like this, where it’s so difficult to get through traffic, we could just really take it easy and then give it our best when we were in clean air. Really, hats off to the entire SunTrust team. They really made it easy for us.”

After the driver change, Angelelli resumed in third place behind the race-leading Paul Edwards in the No. 90 Spirit of Daytona Chevrolet and second-place Jon Fogarty in the No. 99 Gainsco Chevrolet. But both Edwards and Gurney were called into the pits for fuel-and-tire and driver-change stops by the one-hour mark and Angelelli found himself almost a full lap ahead of the rest of the field shortly thereafter.

Angelelli held his comfortable lead until pitting a final time for fuel and tires with one hour to go. He rejoined the race in third place, once again. The leaders this time were the Nos. 90 and 60 cars of Antonio Garcia and Oz Negri, respectively. But just short of the two-hour mark, Garcia made an unscheduled stop due to heat exhaustion and gave the Spirit of Daytona Chevy back to qualifier and race-starter Paul Edwards, and moving Angelelli up to second place. Not long after that, Alex Gurney had to do the same with the No. 99 Gainsco car due to heat exhaustion and had to turn things back over to Jon Fogarty.

Meanwhile Negri had to make his final fuel-and-tire stop at the two-hour mark and turned the lead back over to Angelelli one, final time. The Italian wheeled the SunTrust car around the circuit in first place for the final 57 laps and crossed the finish line 26.026 seconds over Negri, who co-drove the No. 60 Michael Shank Racing Ford Riley with John Pew. Mike Forest and Ryan Dalziel took third in the No. 8 Starworks Motorsport Ford Riley.

The No. 01 Ganassi entry of Pruett and Rojas, which did not win for the second race in row after seeing its six-race winning streak ended at VIR two weekends ago, salvaged a seventh-place finish. It was the first time Pruett and Rojas finished outside of the top-two since last year’s Lime Rock race, ending a streak of nine victories and two runner-up finishes in the last 11 events.

With the victory, the SunTrust team moved to third in the Rolex Series standings, one-point behind the No. 9 Action Express Racing Porsche Riley of Joao Barbosa, Terry Borcheller and J.C. France, and 22 markers behind the point-leading Pruett and Rojas.

“Coming into this race, everybody thought this was going to be easy for us, but people forgot about the fact two of the other main contenders were taken out of the race last year,” Wayne Taylor said. “I knew we were going to have our work cut out for us, but this could not have worked out better – Ricky getting the pole, driving incredibly, just driving away at the beginning of the race, Max doing his incredible job, as usual, despite all of his dramas on the radio. He did great. We have such great partnerships with SunTrust, Toshiba, Dallara and Chevrolet, who have stuck with us so long. We have to do this. This is what we do. This is why they pay to be here. The guys were just fantastic. The car was really good. We just drove away. One thing I’m extremely happy about is to be the first team to win for Chevrolet this season. I so wanted to do this. Mark Kent and Jim Lutz have been so supportive. So, now, a lot of things are off my head. Ricky’s won a pole and a race this year, Max has won a race. Jordan won a race and got another podium today. A lot can be made about the fact the Ganassi car had trouble. But, quite honestly, he was there at the beginning and Ricky just drove away from him.”

The next event on the 2011 GRAND-AM Rolex Sports Car Series schedule is Saturday’s Sahlen’s Six Hours of The Glen at Watkins Glen (N.Y.) International.