The result is the third consecutive podium at the track for the duo Matt Bell and John Edwards, who won both the 2011 and 2012 races at Laguna Seca. 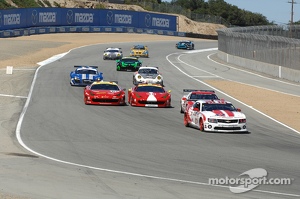 Edwards ran the opening stint in podium position before turning the car over to Bell to take to the finish. Rejoining the fray in 15th place, Bell moved steadily forward to be in positition for the final restart, which came with just 20 minutes remaining in the race.

With several cars fighting for position on the track as well as points in the championship with the 2013 clock running out, there was no shortage of action. But Bell stayed cool on his home track, avoiding the carnage and making the most of each opportunity to score second at the close of a very busy race.

“It was just another crazy race,” said team manager Mike Johnson. “Our whole goal was to stay with the No. 55 car. We had some really good pit stops. We made a really good call on the dive in which got us some track position. I guess technically we still have a shot at the championship, but our goal was really just to finish out this season on a high note. This was probably one of the most fun second places we’ve had, so we’re really happy right now.”

One of the key moments of the race came with just about an hour remaining when a shrewd strategy call saw Johnson call Bell to pit lane from the 10th position for the team’s final pit stop just prior to a full course caution. A quick stop saw Bell emerge from pit road fourth for the restart.

“It really wasn’t all that crazy of a race until the last couple of laps when people started getting desperate, but Matt kept his head on straight and made a great move around the outside of Atterbury,” said Edwards. “He said he saw Atterbury getting loose and tried the outside and since Atterbury had to pinch it, Matt was able to get the run.

This Camaro is pretty beat up at the end of this race, but I think it’s actually put together better than it was at the end of last year’s race here! We’ll take the points, and I think we’re looking pretty secure here for second in the championship.”

The track is one that Bell has long relished running on, and he once again delivered a performance that will see him continue to call the track “home.”

“This wasn’t the car it’s been here—actually the last two years it hasn’t been the best car here that we could have had, but really they kept making decisions to make it more driveable when the tires were burning off of it,” said Bell. “Everybody was having the same issues.

I kept seeing the 51 car in front of me get loose in the braking zones so I tried the outside and he kind of pinched over and I was braking in the dirt, but it all worked out. We still kind of willed ourselves into that because there were a lot of people spinning all over the place, but it worked. I want to thank Ryan McCarthy and all the Stevenson guys, they worked really hard.”