The team is targeting another strong outing at Road America this weekend.

Elkhart Lake, Wis. (9 August 2013) – Fresh off of a runner-up finish at Indianapolis Motor Speedway where Stevenson Motorsports secured the North American Endurance Championship title, the team is targeting another strong outing at Road America this weekend.

John Edwards, who shares the No. 57 Camaro GT.R with Robin Liddell, posted the fourth quickest lap time during Friday’s GRAND-AM Rolex Sports Car Series qualifying session which saw just one flying lap for the Camaro when a lengthy black flag period kept the GT cars on pit lane for the remainder of the quick 15-minute session. Unfortunately, the post-race inspection saw the ride height measurements not aligned with the regulations, and the Camaro will need to make a big move from the back of the pack as the qualifying time was disallowed. 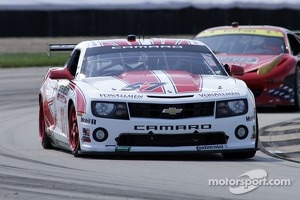 The Stevenson Motorsports No. 9 Camaro GS.R will start from the fourth row in the Continental Tire Sports Car Challenge (CTSCC) race as Matt Bell and John Edwards, who sit second in the CTSCC championship, target a return to the podium. Bell posted a qualifying time of 2:23.718-seconds to take eighth on the grid.

"We ended up taking about half of a second off yesterday and the same today so that's a good improvement,” said Bell. “Mike Johnson is doing strategy, even with a broken leg and I think he is really our secret weapon. He has this vision for the field and he knows exactly what is going on. He has made some really great literally split-second decisions as to whether or not to pit and those are what decide where we are at the checkered flag. We aren't the fastest car in the field, we may not even be top-10, but we are optimistic because we have the best strategist and I think John (Edwards) and I know how to manage this field pretty well.”

It will be a very busy day of race action for Stevenson Motorsports on Saturday as the Continental Tire Sports Car Challenge and Rolex Series races will run back-to-back. Edwards, who pilots both the No. 57 and No. 9 Camaros, will pull triple duty this weekend as he also takes part in the American Le Man Series event on Sunday.