Race to the podium ends at first corner of first lap when a Ferrari collides with the No. 57 Stevenson Motorsports Camaro GT.R Suspension damage results and crew has to make repairs in garage 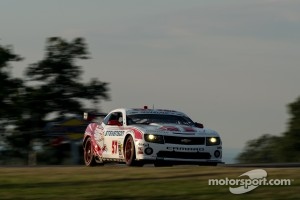 Just one month ago, the No. 57 Stevenson Motorsports Camaro GT.R took the win at the Sahlen’s 6-Hours at The Glen race held at Watkins Glen International Speedway, on what is called ‘the long course’. It was the eighth race of the 2012 GRAND-Am Rolex Sports Car Series. For the tenth race, the series returned to the Glen to run the short course, a configuration used when a NASCAR Sprint Series race is held there. (The Rolex series shared the weekend with the NASCAR Sprint Cup and Nationwide series.)

For the Stevenson team, an errant competitor made the course even shorter when the No. 69 Ferrari, driven by Emil Assentato, locked up its brakes going into the very first turn on the very first lap and collided with John Edwards in the Camaro. The impact damaged the suspension on the left rear corner of the Chevrolet, forcing the team to go back to the pits for repairs,

Edwards had qualified second on the grid and as the pack approached the first corner, he was right in with the front group and beginning his turn-in. Suddenly, the Ferrari began to slide and after spinning, it backed into Edwards’ car, putting his mount out of whack. As the first corner is adjacent to pit out, Edwards had to slowly drive the wounded vehicle all the way around the circuit in order to get back to pit lane.

With determined effort the crew eventually got the car fixed in about a half an hour – at a cost of 21 racing laps - and Robin Liddell went back out to run as any many tours of the short circuit as possible to collect championship points. What they collected in points for their 14th place finish however, could never match what they might have collected if the collision had not occurred, given that they won at this venue just a month earlier.

After a tough race at Indy - A Chip Ganassi Team Daytona Prototype crashed into the No. 75 Stevenson Camaro in an ill-advised move - just a few weeks ago, and the No. 57 crashed at Indy as well, causing two bad weekends in a row for the team. This new collision at the Glen pushed the team backwards to fourth place in the championship standings.

Team Manager Mike Johnson: “I can't think of the last time a race I was involved in was over at the first turn, but today it was. John was helpless as the No. 69 spun and took us out from behind in the first turn of the first lap. The guys in the pits did a super job making repairs and we were able to get Robin some points and finish 14th dropping us to fourth in the championship.

“Emil Assentato, driver of the No. 69 Ferrari, did come by to apologize,” Johnson continued, “which was more than anyone from Ganassi's team did after Indy, so that was nice, I guess. The good news is that Montreal is next weekend, and we have had three wins and a second place finish in the four races we’ve run there, so hopefully we can get back on track.”

Edwards was marginally sympathetic about how mistakes in racing are part of the game when he said: “Morning practice was wet, so we went straight to qualifying with no dry running. The car was strong and we qualified on the front row, but continued to improve the car throughout night practice and were optimistic for a good run at the track that brought us our first win of the season a few races ago. Unfortunately, Emil punted me going into turn one at the start of the race. It was clearly nothing intentional, but sadly it cost us over 20 laps to repair while they managed to only lose a couple of laps. In the end they got back on track sooner and finished in seventh place while we were out so long we were only able to move up to 14th at the end of the race.“

Robin Liddell was supposed to finish the race and challenge for the win from his seat, but the early collision left him with the thankless task of simply running laps as hard as possible just to avoid finishing last.

“This was a very disappointing result for us as we were looking to recover from our low finish at Indy.” Liddell commented. “Assentato in the Ferrari looked to just out-brake himself into turn one and he swerved left into the back of our car and hit it pretty hard. But it was the second hit which damaged the left rear suspension which necessitated repairs and put us out of contention.

“We will continue to fight hard,” Liddell continued, “as it is not over and will be going all out to maximize our points and at least win some of the remaining races."

“It's a shame to have the race over so soon when we could have had a strong result,” Edwards continued, “but the Stevenson Team did all they could and to have our race ended by someone else's mistake is just out of our control. All we can do is fix the car and go back to Montreal, where the Camaro has been strong in the past.”