Robin Liddell and John Edwards will once again team in the No. 57 Camaro in Rolex Series competition while Edwards will join Matt Bell in the No. 9 Camaro for the CTSCC event.

A LOOK BACK – Road America:
Rolex Series: Robin Liddell and John Edwards faced an uphill battle after starting from the back of the pack following a ride height infraction in qualifying. But Edwards made the most of the start to move up to seventh on the opening lap and then up into top-five contention just a few laps later. A driver change on Lap 20 saw Liddell slide into the seat and take back to the track from seventh in the order. The experienced Scotsman was able to move up to fifth as the race entered its final stages, but an issue at the rear of the car forced him into the pits for repairs. The team made quick work of the challenge—diagnosing and then fixing the problem quickly. But the track position was gone, and with the laps reeling off, the team had to accept an eighth place finish.

Continental Tire Sports Car Challenge: Matt Bell and John Edwards were hoping to return to podium form, but a mechanical issue on the Stevenson Motorsports No. 9 Camaro GS.R early in the run cost the team several laps to the competition. After getting the issue sorted, Bell returned to the track looking to try to gain ground and possible points. While the young Californian newlywed enjoyed the handling on the Camaro once it got back on track, the day had yet more frustration in store as the car lost drive in the final moments of the race. 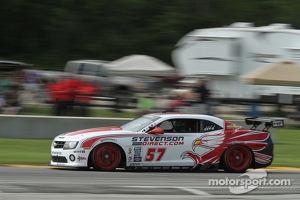 NEW TRACK SUCCESS: Stevenson Motorsports rewrote the record books when GRAND-AM visited Road Atlanta for the first time earlier this year - winning in Continental Tire Sports Car Challenge competition with John Edwards and Matt Bell driving the No. 9 Camaro GS.R, and then following that up with a big victory in Rolex Sports Car Series competition with Edwards and Robin Liddell driving the No. 57 Stevenson Motorsports Chevrolet Camaro GT.R.

The history-making win came from a combination of teamwork, strategy, and skill behind the wheel, as the team scored its second consecutive Rolex Series win.The win was the 50th GRAND-AM or American Le Mans Series victory for Mike Johnson as a team manager or owner and was the 15th Rolex Series win for Stevenson Motorsports. The victory marked the 20th Rolex Series triumph for Liddell, and it marked just the fourth time in GRAND-AM history that a driver won both the Rolex Series and Continental Tire Sports Car Challenge races on the same day, as young Edwards notched the GRAND-AM double.

KANSAS TESTING:
Stevenson Motorsports tested at Kansas Speedway in the No. 57 Camaro with both John Edwards and Robin Liddell taking laps around the new circuit.

KANSAS SPEEDWAY DRIVER LINE-UP:
Robin Liddell and John Edwards will once again team in the No. 57 Camaro in Rolex Series competition while Edwards will join Matt Bell in the No. 9 Camaro for the Continental Tire Sports Car Challenge event.