After being crashed out in last two races, Stevenson Team comes all the way back for a win, the team’s fourth win in five races at the Circuit Gilles Villeneuve 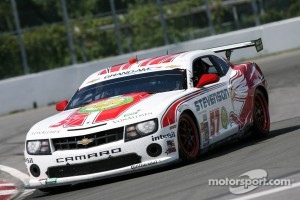 In the previous two GRAND-Am Rolex Series races this season, the No. 57 Stevenson Motorsports Chevrolet Camaro GT.R was put out of contention by crashes. This time, at the Circuit Gilles Villeneuve, in Montreal, Quebec, Canada, the team stayed ahead of the field to take a convincing win. The Stevenson team has enjoyed much success in Montreal, having won this race four out of the last five years. They won in both 2008 and in 2009, placed second in 2010 and won again in 2011. Robin Liddell was one of the drivers in every one of the four Stevenson Team wins as well as for the second place finish. This year, his co-driver was John Edwards.

Edwards put the Camaro on the pole for this race and that put the team in a powerful position to go all the way. In the end, he and Robin Liddell finished under a second ahead of a hard charging AIM Autosport Ferrari 458, with the Team Sahlen Mazda RX-8 just another second back in third.

Edwards used his pole position to drive away at the start and sustain his lead until the first caution period. Team Manager Mike Jonson elected to keep him out on track to strengthen his track position. When the second yellow period came out after about 40 minutes of racing, Johnson brought him in for fuel, tires and a driver change. Robin Liddell left the pits with the lead intact.

With about an hour remaining in the race, Liddell’s radio plug fell out and he could not hear Johnson's information and direction. The team went back to the old fashioned means of communication and waved a sign over the wall letting him know it was time to come in with about 40 minutes to go. Liddell was able to fix the radio problem right before pit in and overall the team completed another great stop. Liddell would go on to lead the rest of the race with a hard charging Ferrari trying desperately to catch him.

Team Owner John Stevenson knows how hard his team works to keep their Camaro at the front at every race and he was as enthusiastic about the team’s performance at Montreal as any owner could ever be.

“The team performed beautifully again this weekend!” Stevenson said after the race. “Everything from the well-executed pit stops, to the complete team effort by the crew and the flawless driving of John Edwards and Robin Liddell, combined with Mike’s brilliant race strategy.

“This win was a great one for us given the difficult way our last two races played out.” Stevenson continued, “When you have back to back poor finishes because you have been crashed into by other cars it makes it that much tougher to come back and fight for a win. The incidents really took away our shot at winning the GT Championship but the results at Montreal, and the commitment to excellence that permeates this entire team, tell me we will work as hard as we can to get that second spot. This was a fantastic race and such a sweet victory for us!”

Mike Johnson: “After the last two races, it was great to have another win. The team really needed it and Montreal has always been great for us as we have four wins and a second in five races. While the race looked easy on TV, it was stressful because we led almost every lap and we were just waiting for something bad to happen. Our first pit stop was unbelievable and we might have had the fastest driver change and four tires we have ever done. While Jeff was catching us in the end, I think we all felt pretty confident that Robin was not going to let him by.”

Liddell: “Coming into the race we expected to get run down towards the end, and sure enough the Ferrari stepped up the pace and closed the gap with less than 10 laps to go, but fortunately I had looked after my tires and I figured even if he got close enough it was doubtful he would get around me.”

Liddell was not about to let a golden opportunity slip away with a mistake. A hard charging Jeff Segal in the championship leading Ferrari was right on his tail on the final lap but Liddell stayed in front right to the end. “I can't believe that we won our 4th Rolex Series race at Montreal!” Liddell said, “A lot of people were talking about our good finishing record there before the race; now there will be even more pressure for next year! The Stevenson Chevy Camaro was super all weekend!”

Edwards knew that Liddell wasn’t about to yield a win to anyone, let alone the team leading the championship.

“Robin did have a lot of pressure from Segal towards the end of the race,” Edwards commented, “but he did a great job to run mistake-free despite the car getting loose at the end of the stint. Although Segal was fast, I don't think Robin was prepared to let him by at any cost!”

Always equally impressed with his co-drivers talent, Liddell complimented his partner in speed for having won the pole position. “John pulled a rabbit out of the hat to put the car on pole and he led the first stint comfortably before handing over to me during the second caution.”

A crash-free event aside, the race was not completely devoid of drama.

Liddell: ”From our point of view the race was quite uneventful really; the pit stops were flawless and apart from my radio plug getting dislodged, everything went according to plan.”

Liddell’s helmet air hose had fallen off and this disconnected the plug to the radio. Without communications he could not tell when to pit again.

“I was trying to refit the helmet air hose which had fallen off in the car, when I realized after a few laps with no communication what had happened. I had to ferret around trying to get the plug wire to go back in to my helmet but it took me a few laps to do it. When I did get it plugged back in I literally heard Mike shouting “PIT NOW!” so I came straight down pit road; I was already braking for the last turn!

“It was a great result,” Liddell continued, “which was just the right tonic after the disappointment at the Glen last weekend. Thanks again to the whole team and Johnny and Susan who were both there to cheer us on!"

Edwards: “We couldn't have rebounded from the contact last weekend better than we did. Pole, win, and led every lap except during the pit stop sequences. The Camaro was fast, but we did expect pressure from the No. 59 Brumos Porsche and the No. 94 Turner Motorsports BMW. Fortunately for us, both of those cars had issues during the race, so they did not pressure us at the end of the race.

“The team had one of their fastest stops ever on the first stop,” Edwards noted, “and another great second stop, proving they do well under pressure! I can't thank the guys enough for all their hard work this weekend, but also after difficult races like the past two. The crew kept their head down after two bad races, and it paid off with a win this weekend.”

The win, the team’s second this season, (they also won at the Sahlen’s Six Hours at The Glen a few weeks back) pushed them back up into third place in the season championship standings, just a single point behind the second place team and 30 points behind the leaders, with two races remaining in the season.

The final push to a possible season championship would require a continuation of the team’s good fortune received in Montreal, combined with a significant drop off in performance by the AIM Ferrari and Turner Motorsports BMW. Both the Ferrari and the BMW have only finished out of the top five in two races this season. It wouldn’t be easy, but it isn’t impossible.

Johnson: “The championship is basically over for us, but we are now in a very tight battle for second place, so we will be fighting very hard the last two races.”

SpeedSource places fifth at the Circuit Gilles Villeneuve in Montreal