The drivers of the No. 2 Starworks Motorsport with Alex Popow BMW/Riley lead Alex Gurney and Jon Fogarty by 10 points (229-219), entering Saturday’s VISITFLORIDA.com Sports Car 250 at Road America. Gurney and Fogarty won earlier this season in the No. 99 GAINSCO Auto Insurance Corvette DP, and finished third at Indy.

Staying on top of the DP standings has been difficult in 2013.

Wayne Taylor Racing drivers Max Angelelli and Jordan Taylor entered Indianapolis tied for the lead, but failed to finish in the No. 10 Velocity Worldwide Corvette DP and are now third in the standings with 210 points, 19 behind the leaders. Also encountering problems were Action Express drivers Christian Fittipaldi (207) and Joao Barbosa (205), who now co-drive the No. 5 Action Express Racing Corvette DP.

Chip Ganassi Racing with Felix Sabates drivers Scott Pruett and Memo Rojas won two races early in the season in their quest of a fourth consecutive title, but incidents at Detroit Belle Isle and Mid-Ohio dropped them in the standings. The pair finished second at Indianapolis in the No. 01 Telcel/TELMEX BMW/Riley and now stand sixth in the standings with 204 points, 25 behind the leaders. 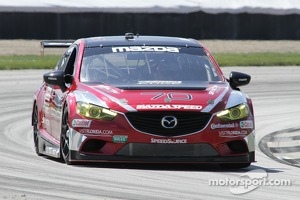 The diesel-powered Mazda 6 has hit its stride at just the right time in the 2013 Rolex Series.

The car became the first diesel-powered car to win at Indianapolis Motor Speedway when Sylvain Tremblay and Tom Long drove the No. 70 MAZDASPEED/Castrol machine to the GX class victory in the Brickyard Grand Prix.

Currently making history in the new Rolex Series GX class in 2013, the diesel-powered Mazda6 will transition to the GT Daytona (GTD) class for next year’s United SportsCar Racing season.

“We’re excited that the car will be included in GT Daytona next year,” Tremblay said. “Our car is getting more and more competitive at each event, and hopefully, we can close the gap with the other GT cars over the last four races.”

SpeedSource is on quite a roll, riding a streak of five consecutive GX victories for the SKYACTIV-D clean diesel powerplant.

It’s been a year of firsts for Mazda and SpeedSource, fielding the first diesel to race in both the Rolex 24 and GRAND-AM Road Racing in January. The new car won for the first time at Road Atlanta at April – with Joel Miller and Andrew Carbonell winning in the team’s No. 00 VISITFLORIDA.com entry.

That began a streak of five consecutive victories for the new Mazdas. Entering Saturday’s race at Road America, Miller trails Jim Norman by 13 points in the GX standings (265-252), with Tremblay and Long another two points back.

Robin Liddell and John Edwards have won half of the eight races, but Andy Lally and John Potter lead the Rolex Series’ production-based GT class on the basis of consistency in the No. 44 Magnus Racing Flex-Box Porsche GT3.

Entering Saturday’s VISITFLORIDA.com Sports Car 250, Lally and Potter have finished sixth or better in every event. The pair have a streak of three straight podium finishes, taking second at Mid-Ohio and third at Watkins Glen and Indianapolis, and lead the championship by four points (229-225). 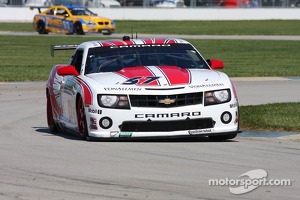 Edwards and Liddell followed up their victories at Barber Motorsports Park, Road Atlanta, Detroit and Watkins Glen International by finishing second at the Brickyard Grand Prix in the No. 57 Stevenson Auto Group Chevrolet Camaro. However, three finishes of 10th or worse have them running second in the points.

Paul Dalla Lana – a two-time winner for Turner Motorsport this season co-driving with Bill Auberlen – is fifth in the standings (204 points).

Fall-Line Motorsports is on a roll coming to Road America – the venue closest to its headquarters in Northbrook, Ill.

The team won the two most recent Continental Tire Sports Car Challenge races at Watkins Glen International and Indianapolis Motor Speedway, the only two triumphs in the series for drivers Mark Boden and Bryan Sellers. 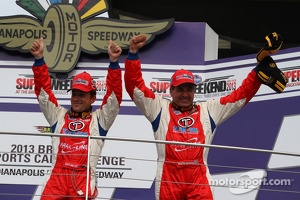 Prior to 2013, the team had only one victory in the series, in Watkins Glen in 2010 with Charles Espenlaub and Charles Putman.

Fall-Line will also race in the Rolex Series GT class of the VISITFLORIDA.com Sports Car 250, with Espenlaub and Putman co-driving the No. 46 Audi R8.

· Mark Boden of Winnetka is one of four competitors in the Continental Tire Sports Car Challenge who live in Northeast Illinois, just south of Milwaukee and Road America. Other Illinois drivers include Nick Mancuso of Lake Forest; Tonis Kasemets of Mundelein; and Joe Koenig of Glenview. Mancuso and Kasemets drive Aston Martins for Multimatic Motorsports, while Koenig drives a BMW 128i for Burton Racing.

· Nick Longhi and Matt Plumb, winners of last year’s Road America 200, are two-time winners in 2013 behind the wheel of the No. 13 Rum Bum Racing Porsche Carrera in GS. John Edwards and Matt Bell in the No. 9 Stevenson Auto Group Chevrolet Camaro retired with suspension damage at Indianapolis, and trail the Rum Bum duo by 33 points (209-176).

· Jade Buford is riding a streak of three consecutive GS pole positions – and five for the season – in the No. 55 Multimatic Motorsports Aston Martin.

Tagliani to run Ferrari at Kansas