THE PLOT: Starworks Motorsport has put together the cream of motor racing in their bid to win the watch at the 50th running of the Grand-Am Rolex 24 at Daytona this weekend (January 26-29). 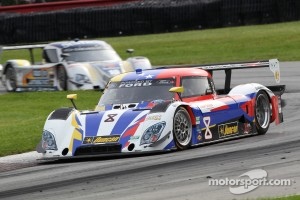 But now the Fort Lauderdale-based team is hoping action on the track will make even more headlines.

Starworks Motorsport will be bringing their new 2012 Ford Riley to the Florida track for the first time, but they are confident they can be more than a match for the Grand-Am big guns.

THE QUOTES: Team owner PETER BARON: “It should be a little more of a difficult process for us because it is the first time that we have run the Gen3 bodywork. The other teams have run it a few times, but we are still confident about our engineering.

“We believe the car just needs some simple aero modifications and Riley Technology is helping us get up to speed quickly. It is the first time for us running the car so we are naturally optimistic. We are confident about the bodywork and, as long as the drivers keep their noses clean, we should be set for a good result.

“The Roar Before The Rolex worked out really well for us. We were able to work on car set-up. Everyone is pretty comfortable with the car.

“I am very wary about making any predictions for this race because, every time you think you have everything covered, something out of your control happens. I just hope that everyone does their best. If that goes to plan then there is no reason why we can’t be on the top step on Sunday afternoon.”

RYAN DALZIEL: “It is a huge event to win in any year. I definitely feel that you learn something every year and this is the most prepared I have seen any car that I have competed in at this point.

“It is very well prepared and it is fast. We have learned from our mistakes in the past and I think the guys at Starworks have given us a car that is not only reliable, but extremely fast.

“It is a 24-hour sprint. The machinery has become so reliable. It used to be that you conserved a little bit and then hoped you were still there with two hours to go, then you put your foot down and went for it.

“But we have to be smart. We can’t go in and start bouncing off people and hitting kerbs. We have to push 100 per cent, but we also have to be as gentle as we can with the equipment. The team have done an incredible job in trying to eliminate things that have come up in the past and mechanical issues that we have had. I am very excited about our chances.”

ALLAN McNISH: “The 50th anniversary of this race is probably going to be one of the most difficult to predict. We are running with the new Riley-bodied car with the Ford engine and I think the Riley has always been a strong contender round about this circuit.

“The important thing is just to be clean and to be tidy, to have a good consistent set-up on the car which might even compromise qualifying but certainly we are looking towards getting the right car balance for the end of the race and, at that point, we will see where we are. By what I felt at the pre-test, we are in with a reasonable starting position.”

UPDATE: Starworks Motorsport is focusing its efforts on the #8 car after a late development concerning the line-up for the #2 car. IndyCar stars Tony Kanaan, Ryan Hunter-Reay and EJ Viso had been due to drive with Maurizio Scala and Miguel Potolicchio, but those plans have had to be shelved although discussions are still taking place in a bid to get the #2 car on to the grid.

PETER BARON: “It is a real shame. The funding didn’t come through to make the drives happen. It would have been very exciting, but that is motor sport. Sometimes these things happen. Everybody worked very hard to get everything in place, but at the last minute it didn’t come together.”

THE FACTS: Starworks Motorsport comes into the race on the back of a victory in the final round of the 2011 Grand-Am Rolex Sports Car championship at Mid-Ohio. Ryan Dalziel and Enzo Potolicchio were the drivers that day.