Starworks continues to shine with victory for #8 at Road America

Starworks Motorsport and fellow 4.5L BMW powered DP teams were slapped with a 150 RPM (8200 to 8050 RPM) power restriction by the GA organizers earlier this week.

The #8 Starworks Motorsport BMW-Riley of Scott Mayer and Brendon Hartley won the 2013 ‘VisitFlorida.com Sports Car 250’ at Road America in nail-biting style. In a race of mixed fortunes for the team which saw it take its sixth straight podium, the 2 car was forced to retire on lap 38 despite which its drivers continue to lead the championship on 246 points. 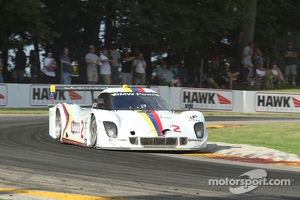 Following a stunning win at the Brickyard Grand Prix by the 2 car, Starworks Motorsport and fellow 4.5L BMW powered DP teams were slapped with a 150 RPM (8200 to 8050 RPM) power restriction by the GA organizers earlier this week.

Despite this ‘set back’ the Fort Lauderdale based squad topped the time sheet in second practice on Friday morning in Wisconsin and qualified P7 and P13 in the #2 and #8 Starworks respectively in the afternoon. On a sunny Saturday both cars made a good start to the 2 hours 45 minutes endurance race. An early spin by Rojas in #01 meant that Scott was up to P11 by lap 11. Alex Popow was running P6 after the #5 Corvette ahead made an early tire call. Unfortunately, with just over 2 hours on the clock, he stepped on the brakes and had no grip as he slid in to the back of the #01. With damage to both cars, the 2 car came in with a hole in the nose, but just for tires, fuel, damage assessment and a driver change to Ryan Dalziel.

Ryan was then running in P9 and at the scheduled DP pit stop for #8, Brendon Hartley took to the wheel in P13. Both cars made up a position at the 1 hour 50 minutes mark, with Ryan in the #2 Starworks charger then over taking #90 for P7. Brendon was setting consistently fast laps and was soon in the 2:02’s to run in P11 by lap 29.

The 2 car then encountered trouble. Ryan radioed in to alert the team of a loss of power and with 1 hour 20 minutes to go he came in to pit road to check the coils, but as he started up to exit the pits smoke billowed out of the back of the Riley, indicating a terminal issue and the end of his race.

The team shut down the engine, but had to ask for a full course yellow to get Ryan out of the 2 car which was parked on the edge of the exit of pit road. Seven laps later, the yellow came out and Brendon Hartley took the 8 car up to P11. He had a great re-start and was soon up to P7 when both Team Sahlen DP’s ahead dropped out on the same lap. With only 40 minutes remaining the race came under its second full course yellow as the track was cleared of cars and oil.

The team then did what he does best; he adapted the #8 Starworks strategy and while others pitted, kept Brendon out on track under the second caution. He was then in P1 and with all teams wondering how long the caution would last and if they had enough fuel to take them to the chequer, the tension at Road America was palpable.

With 23 minutes on the clock the track went green and Brendon in the 8 car pulled away from the pack. The Flying Kiwi continued to up his pace but kept his head to narrowly miss debris on track and keep over 1.7 seconds ahead of the #5 Corvette of Barbosa. Brendon took the chequered flag at the end of the ‘VisitFlorida.com Sports Car 250’ to win his first race of 2013 with Scott Mayer – a perfect birthday present for the 8 car engineer Tim Lewis.

Peter Baron, Team Owner: “I am so happy for Brendon and Scott to break through with the win; we knew it would happen this year. Both cars could have won today, but for the 2 car the good news is that Alex and Ryan still lead the Drivers’ Championship and also the 8 car now jumps up a couple of places in the Team standings. So with three races to go, it’s still looking good.”

Brendon Hartley, #8 Starworks: “I feel awesome; the car was so good today. It is an emotional win as it has been a while since I’ve won a race and it has been building up for a while. Scott drove a great first stint and the team did a faultless job; the strategy was perfect. I want to give a massive thanks to everyone at Starworks. All of the tracks are new to me and I’m loving racing in the US. It is such a relief to get this first win under our belts and hopefully we’ll be up there fighting again in Kansas next week.”

Ryan Dalziel, #2 Starworks: “It’s a bitter sweet day for us. We for sure had a car to win today, but unfortunately we had a small motor issue and ended up with a DNF. That's racing and we win as a team and loose as a team. I am really proud of everyone at Starworks, Dinan and BMW North America and we look forward to bouncing back at Kansas next week. Also want to congratulate Brendan, Scott and all the 8 car crew for a fantastic win. Heading to Kansas we still have the points lead and we look forward to extending it once again."

Alex Popow and Ryan Dalziel remain in the lead of the 2013 Rolex Series Drivers’ Championship with 246 points. The 2 car is in second place in the Team standings with 246 (behind leader Chip Ganassi Racing on 251) and the #8 Starworks sits in sixth position with 212 points.