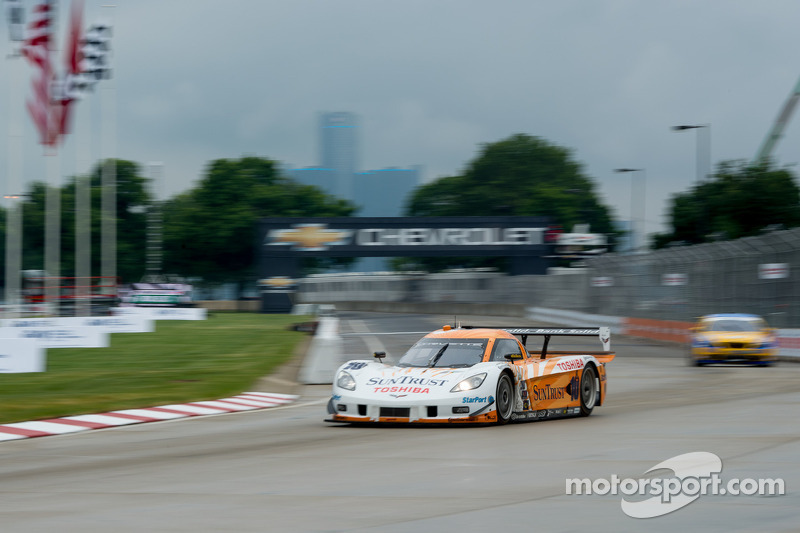 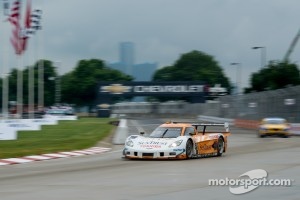 The way the first half of Saturday’s two-hour Chevrolet GRAND-AM 200 Rolex Sports Car Series race was playing out, it looked like Max Angelelli and Ricky Taylor were well on their way to their third win in as many races and they were going to leave town with the series championship lead.

But, in the blink of an eye, the cold, hard reality of a mid-race brush with (more like an untimely smack against) the concrete wall at the exit of pit road managed to snatch away everything. It was a victory the No. 10 SunTrust Corvette Dallara DP team of Wayne Taylor Racing wanted so badly, in the shadows of General Motors headquarters just a few miles down Jefferson Avenue. But the midrace mishap sent the SunTrust team to the sidelines in stunning fashion just 39 laps into the 72-lap event with a 10th-place finish.

The day started out according to plan as the veteran Angelelli, who qualified the SunTrust car second, stayed in close pursuit of polesitter Jon Fogarty in the No. 99 Gainsco/Bob Stallings Racing Corvette DP for the entire opening stint around the 2.1-mile, 14-turn Belle Isle temporary street circuit. On lap 20, just 31 minutes into the race, Angelelli and Fogarty pitted under caution for tires, fuel and driver changes. The SunTrust crew gained the upper hand as Taylor easily beat Fogarty’s teammate Alex Gurney back out on track.

Taylor restarted second, however, to the No. 01 Chip Ganassi Racing with Felix Sabates BMW Riley now driven by defending series champion Scott Pruett, whose team managed to get in and out of the pits just before the caution flag appeared. No matter, as the 22-year-old Taylor got past the veteran Pruett for the lead one lap after the race went back to green on lap 22.

Once he got by Pruett, Taylor opened up a comfortable lead on the field and held the point for the next 12 laps, and felt he had a car capable of managing the pace the rest of the way.

On lap 34, at the 58-minute mark, a GT-class competitor contacted the turn-one tire barrier and came to a halt as Taylor was just two turns from the pit road entrance. Anticipating the caution flag that eventually waved for the incident, the SunTrust crew quickly called Taylor into the pits for a fuel-only stop that was expected to carry him to the finish. But on his way back on track, Taylor contacted the pit road wall with first the left front and then the left rear of the SunTrust car. He slowly limped the car back around the track with both left-front and left-rear suspension damage and headed straight to the garage for repairs.

The SunTrust crew got him back out on track eight laps down, but Taylor reported the car was not stable enough to continue at race pace after four tours of the circuit. He returned to the garage and the day was over.

“We had a car that I think should’ve won the race,” said Taylor, who with Angelelli came to Detroit after back-to-back victories at Homestead-Miami Speedway and New Jersey Motorsports Park in Millville. “I just pushed too hard on pit out and I kind of overestimated the grip level of the pit lane and made a mistake and hit the wall. I feel really bad for the whole team and, hopefully, I can make up for it at Mid-Ohio (next week). I just feel really bad because, with how close the championship is, you want to win every race where we’re strong. It goes up and down as far as who’s strong each weekend. I just wish I wouldn’t have made a mistake and we could’ve taken advantage of this good car. The pit stops were perfect, the strategy was perfect. The call to pit there was perfect. It was all going well and it was just my mistake.”

“The car was really good, we both proved it,” Angelelli added. “The pain of it is, it’s so difficult to win these GRAND-AM races, as everybody knows – and we weren’t the only ones who were out of contention even today. It’s frustrating when you’re in position to win the race and you don’t win the race. That’s tough. I feel bad for Ricky. I want to help him and I’m sure we’ll be stronger together after this. He will be stronger, I will be stronger. The positive thing is that we will be back racing next weekend, so he (Ricky) will have to suffer only for a few days.”

Despite the 10th-place finish, the SunTrust team lost just four points to the championship-leading No. 8 Starworks Motorsport Ford Riley of Enzo Potolicchio and Ryan Dalziel, which finished sixth. The SunTrust team started the day in second place in the championship, four points behind the Starworks team, and leaves Detroit in fifth place but trailing the leaders by just eight (142-134). There is a three-team tie for second place between the No. 60 Michael Shank Racing Ford Riley of John Pew and Oz Negri, the No. 01 Ganassi BMW of Pruett and his co-driver Memo Rojas, and the No. 5 Action Express Racing Corvette DP of Terry Borcheller and David Donohue.

“I feel really bad for the team and for Chevrolet after they put so much into this event – it meant so much,” said team owner Wayne Taylor, whose 20-year-old son Jordan Taylor, Ricky’s younger brother, scored the GT-class victory today with co-driver Paul Edwards in the No. 88 Autohaus Motorsports Camaro. “The team did a heck of a job with the car. Max drove a great stint. Ricky drove well all weekend. He just made a mistake. It is what it is. We’re going to have to regroup and get back next week. The points don’t look as bad as I thought and we’re going to race again next week, so the pain will only last a couple of days.”