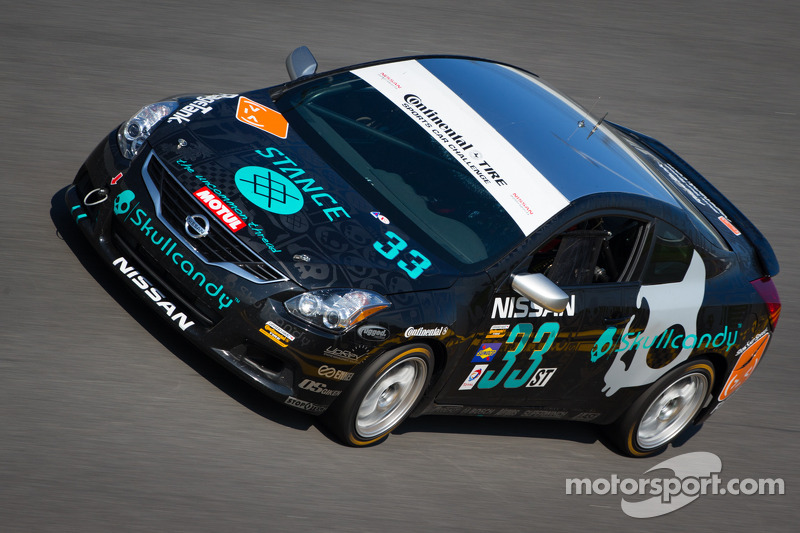 Winning at Daytona, one of the most iconic homes of motorsport, is a big task for anyone in any series. Doing so during the season opener in GRAND-AM's Continental Tire Spots Car Challenge, one of the most exciting and competitive road racing series world-wide, makes it even more memorable. Skullcandy Team Nissan, the Salt Lake City based factory supported team managed to bring itself, partners Skullcandy, Stance and RageTank, as well as Nissan, back to victory lane. The win marks a return to professional motorsports success in America for Nissan Motorsports and the Nismo brands—the first in over a decade. 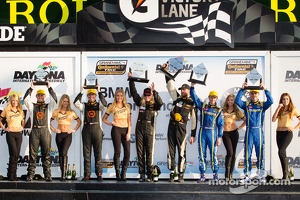 Running a pair of Nissan Altima Coupes, the #33 car was driven by Lara Tallman and Vesko Kozarov and #34 by Chris Lock and Pete McIntosh II. The team finished first and ninth in the 34 car field.

Team owner Lara Tallman started the 2.5 hour race in the thick of things in the 33, holding position and preserving the equipment for the inevitable late race charge. She handed over the driving duties to teammate Vesko Kozarov at the 20 minute mark. This was a very aggressive strategy, robbing Lara of the opportunity to score points, as Grand Am rules state that a driver must complete 30 minutes of driving time to be eligible. Aaron Pfadt, calling the strategy, explained: “ We had pace and the opportunity was there to score, but we had to gamble. The call on fuel and driver change was to be critical. Lara decided that winning was more important than her points so we took it. It paid off as we found ourselves in the lead at the one hour mark. From there, we had another tough call to make on fuel. We stopped early gambling on quite a bit of cautions. We got some of them and had to save fuel to make up for the rest. This thing had only fumes at the end. Only once we crossed the line did we know the call worked.”

From there, it was down to Vesko to get to the front and stay there and out of trouble. With 70 cars on track and some of the biggest names in motorsport gunning for a win, that is not always easy. A key component to the success was the Josh Sandel led crew. Fast and flawless as always, they kept the 33 in the thick of things. Both stops saw the team leapfrog competitors and get closer to the front. With 40 minutes to go, Vesko took the lead for the last time, with no intention of doing anything other than winning. Having opened up a 2 second lead, two late race cautions brought anxiety to the team. “ The car was strong and the team was stronger, making gains on the field in strategy and pit stops. It was down to me to bring it home. There was no way I was to let this thing get away. We came to dominate and we did it. The last two cautions were a huge help in terms of fuel and our strategy but they were a concern. There were a couple of guys that were very strong and I knew if they came along on the restart I would have a tough time making this stick. The restarts were key. I had to get them spot on and nail the first lap following in order to get a gap and break the draft. Done.” And so it worked.

The 34 was started by Pete McIntosh II. By mid distance, he had worked his way into the top ten and handed over to Chris Lock with just over an hour to go. A late race multi car battle saw Chris Lock emerge in 9th place at the checker, making for a very strong showing and a bag of point for Nissan in the manufacturer championship, which they now lead.

"I'd like to give a huge thank-you to Nissan, Skullcandy, Stance and RageTank, for their support in our quest for a championship. This was an epic weekend and we'll strive to repeat our victory in Austin!" — Lara Tallman, driver

“This was a great win for the Skullcandy Nissan team in a very competitive racing class at a tough race track. Lara, Vesko and the team earned this win, and it is gratifying to see all of their hard work pay off as well as the Nissan Altima in Victory Lane at the start of the season.” — Ron Stukenberg, Senior Manager, Nissan Motorsports

"I will tell you this, I did not see this outcome being possible 2 hours before the race. We were bit behind on preparations but the crew dg in and cleared all hurdles. They performed flawlessly on all 3 pit stops. The tire changes on the #33 and #34 happened back to back without a hitch. Those stops coupled with the outstanding strategy calls from Aaron Pfadt on the box, and the amazing driving from Vesko and Lara were instrumental in getting the #33 car to the front. The #34 car did an outstanding job getting into the top ten. Pete McIntosh and Chris Lock drove a great race as well. I am just extremely proud to have gotten this win. We have worked so hard and poured so much blood, sweat and tears into this program. We knew we could do it and we proved it today!" —Josh Sandel, Crew Chief