The finish awarded the team the North American Endurance Championship, a championship within the Rolex Series title competition.

Speedway, IN. - Another round of the Rolex Sports Car Series and the Continental Tire Sports Car Challenge is complete for John Edwards after the Brickyard Grand Prix. In addition to winning the North American Endurance Championship, Edwards and co-driver Robin Liddell earned their fifth Rolex GT podium in eight races with Stevenson Motorsports at the legendary Indianapolis Motor Speedway. 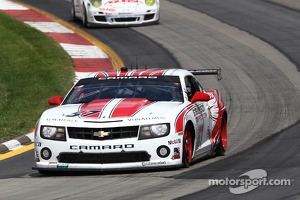 Liddell started the 57 Camaro from second position, and within the first few laps was leading the GT field. The Camaro stayed in the lead position until pitting during a full course caution on lap 26. Restarting from fifth position, Liddell maneuvered the car up to third before coming in for a full pit stop during another full course caution in lap 41.

At the halfway point, Edwards entered on track in fourth position, quickly battling for third. Holding of the 63 Ferrari, the Camaro raced on, chasing the first and second places Porsches of Park Place Motorsports and Magnus Racing.

With one hour remaining, the top four GT cars pitted. After an expert stop by the Stevenson Motorsports team, the 57 Camaro gained second position over the Magnus Racing Porsche as Edwards rejoined the field. The Park Place Porsche struggled with a gearbox issue, while the Magnus Porsche slowed to avoid DP contact, but the 57 Camaro held strong, allowing Edwards to advance to second. Edwards finished second, earning his fifth Rolex Series podium finish for the 2013 season.

"I was pushing really hard through the last stint, especially after the last stop," said Edwards. "Up until the last ten to fifteen laps, all those laps were qualifying laps because we didn't know how everything would shape out. Even though there was a large gap to the lead, we knew that every second counted."

The finish also awarded the team the North American Endurance Championship, a championship within the Rolex Series title competition. The NAEC is awarded by performance of GRAND-AM's three longest and most prestigious endurance events on the 2013 calendar: Rolex 24 at Daytona, the Sahlen's Six Hours at the Glen, and the Brickyard Grand Prix. Although mechanical issues resulted in a poor finish for Stevenson at Daytona, a win at Watkins Glen and a second place finish at Indianapolis clinched the 2013 NAEC title for the team.

"We did what we had to do after a poor finish at Daytona," said Edwards. "I'm really happy for John Stevenson and the team."

Edwards and Liddell now sit five points away from leading the Rolex Series GT driver championship standings. After a difficult Continental Tire Sports Car Challenge race, Edwards and Matt Bell were unable to finish the event at IMS. Although their points gap on the championship title increases from 18 to 33 points, the Stevenson duo still hold second place.

GRAND-AM's next event will be the VisitFlorida.com Sports Car 250 at Road American in Elkhart Lake, Wisconsin, August 8-10.

Dalziel storms to Indy win and takes lead in series