Next up is the Visitflorida.com Sports Car 250 at Road America in Elkhart Lake, Wisconsin on August 10, 2013. 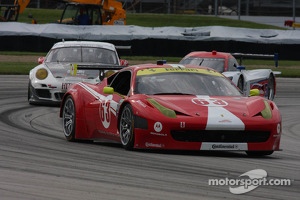 Bringing both his cars across the finish line in such a competitive field and at such an historic track led team principal Giacomo Mattioli to observe, “another top five finish for the #63. I’m also satisfied with the result for our #64. I think Dr. Randall and Ken Wilden did very well with a limited amount of time in practice.

The #63 was extremely competitive during the race but unfortunately we had an issue in the pits that slowed us down. I’m very pleased with our drivers. Alessandro drove a great race and Leh fit in very well with the team in his first weekend.

Looking forward to the next one!” Alessandro Balzan, looking to regain his Grand-AM GT driver points lead, started the #63 in position and immediately began fighting his way through the top of the field. Balzan drove blistering lap times in a crowded field that saw four full course yellows and led the GT pack for 12 laps before handing the wheel to Leh Keen.

Balzan, who managed a spectacular first half shared his disappointment of the final outcome, “I’m a bit upset considering how strong we were in the first part of the race. Pit stop issues and unlock compromised the race. The fifth position is tough considering we had a car that could win this historic race but it makes me eager to win the next one!”

Co-driver Leh Keen who stood on the podium in last year’s Brickyard 500, and has two GT championship titles was pragmatic about today’s result, his first with Scuderia Corsa, “the Scuderia Corsa team is a really good group and we’re determined to go after the Championship. It was nice seeing Balzan in the car the first part of the race.

He did an awesome job and I think we will be strong the rest of the year. We had a tough race; some issues in the pits and some bad luck cost us some positions and that added up. We definitely had a car that could finish on the podium or even win the race, it just didn’t go our way in a sense, but I really enjoyed my first weekend with Scuderia Corsa and am looking forward to the next four races.”

Dr. Rod Randall, driver of the #64 car, shared his thoughts on his first race under the Scuderia Corsa banner, “it was a thrilling experience and great operations team. We are looking forward to future opportunities with Scuderia Corsa." Co-driver Ken Wilder added, “a thrill for Scuderia Corsa and a good first weekend with these guys. The #64 was a very comfortable car to drive and finishing 6th at Indy was great!"

Next up is the Visitflorida.com Sports Car 250 at Road America in Elkhart Lake, Wisconsin on August 10, 2013.

Button and Pérez are top-10 at Hungaroring

BMW drivers finish on the podium in CTSCC race at Sebring