Daytona Beach, FL – History was once again made at this year’s 51st running of the Rolex 24 at Daytona. Scott Pruett, with the help of his Chip Ganassi Racing with Felix Sabates teammates, took home his fifth career Rolex 24 win.

The win ties Hurley Haywood for most wins by a driver at the storied race. The No. 01 BMW topped the podium on Continental tires with the No. 10 Corvette and No. 60 Ford on either side. 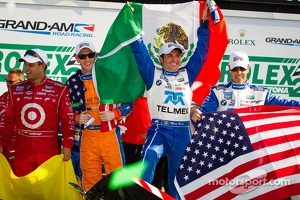 “We would also like to congratulate Chip Ganassi, Memo Rojas, Juan Pablo Montoya, Charlie Kimball and everyone at the Chip Ganassi Racing with Felix Sabates organization for a well deserved Rolex 24 win.

It’s an honor that Chip and Scott were both able to win their fifth Rolex 24 on Continental’s.”

There was no need for rain tires over the course of this year’s 24 hour event, but debris and car-to-car contact took a toll on some teams. As the track changed from day to night, teams began to double stint on their Continental tires.

Upon completing their stints, drivers overwhelmingly commended Continental on building a durable tire that was providing the performance they needed to run up front.

“(The tires were) consistent throughout the whole run and I think I did my fastest lap three laps from the end,” said Jordan Taylor, driver of the No. 10 VelocityWW Corvette Daytona Prototype (DP), following his stint early in the night.

“So obviously they are very durable and it’s nice to have a tire like that where you can push it the whole way through the stint and the fuel load is what matters now. So as the car gets lighter, you go faster.”

As Sunday morning fell upon Daytona International Speedway, fog enveloped the track causing a lengthy caution. Just prior to 9:00 a.m., green flag conditions resumed and just over 50 teams continued to battle for position in pursuit of the coveted Rolex watch.

The hours ticked on and with just one hour to go, the DP battle really heated up as the No. 60, No. 01 and No. 10 fought hard for first-place.

After a mechanical break and a penalty, the No. 60 Michael Shank Racing team was truly the comeback story of the race as they made up countless laps to contend for a back-to-back win in the end.

The efforts of the No. 60 team came up short as they would settle for third behind the No. 10 Corvette of Wayne Taylor Racing.

As the checkered flag fell upon Daytona International Speedway, it was the No. 01 BMW Riley that took home the win with GRAND-AM regulars, Pruett and Memo Rojas; NASCAR standout Juan Pablo Montoya; and Charlie Kimball behind the wheel.

A spectacular overall, and DP, win for the entire organization.

In the Grand Touring (GT) class, it was the No. 24 Audi R8 taking home the win with drivers Filipe Albuquerque, Oliver Jarvis, Edoardo Mortara, and Dion von Moltke.

And in the brand new Grand Experimental (GX) class, it was the No. 16 Porsche Cayman with Shane Lewis, Jim Norman, David Donohue and Nelson Canache grabbing the historic first Rolex 24 win in GX.

Driving in the Grand Sport (GS) class, Roush Jr. powered the No. 61 Roush Performance Mustang from mid-pack to the lead early in the race. Johnson took over and led the final 70 minutes to win by 1.812 seconds.

In the Street Tuner (ST) class, Lara Tallman became the first female CTSCCS winner since 2011 with the help of co-driver Vesko Kozarov.

The GRAND-AM Series returns to action March 2 when the Rolex Series and Continental Tire Sports Car Challenge Series visit Circuit of the Americas in Austin, TX for the first time. Tune in to SPEED and MRN for live coverage.