SCC: Carter and Plumb to continue their championship chase at Road America

Al Carter and Hugh Plumb have done an excellent first half of the season. After five of the ten races scheduled in the 2012 Continental Tire Sports Car Challenge, they are tied for second with Matt Plumb and Nick Longhi. The B+ racers are only one point behind the championship co-leaders John Farano and David Empringham. 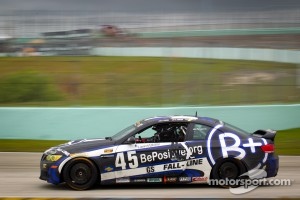 Carter and Plumb have been really consistent throughout the first five races and their worst result was an 8th place finish at Homestead. Being second in points for the 45 B+ Foundation - Jetset Magazine Fall-Line Motorsports BMW team is a great performance. This is Hugh Plumb and Al Carter's third seasons together and it looks so far as if they are on target with their ambitions to finish in the top three of the 2012 championship.

Al Carter is motivated, focused and eager to start practicing at Road America. "After the halfway point of the season, we find our #45 B+ Foundation - Jet Set Magazine BMW in a virtual dead heat for the Continental Tire Series points lead. I'm exceptionally proud of where our Fall-Line Motorsports team has gotten us with consistent cars, and consistent finishes," said Carter. "Hugh Plumb continues to impress with some dramatic late race exploits that have garnered our #45 some extra positions in the closing lap. It's unlikely the Grand-Am manufacturer rules will allow us to contend for the win, but we'll head to Road America focused on the things we can control and what's gotten our Fall-Line Motorsports BMW to this position, our handling, pit stops and mid race strategy with the hopes of Points, Points, Points! Road America and Watkins Glen on back to back weekends is going to be some exciting racing, and our B+ Foundation - Jetset Magazine BMW just might keep surprising the Continental Tire Challenge Series paddock."

Hugh Plumb had great runs in the past at Elkhart Lake and like Al Carter he is excited about his championship ranking and is looking for a great result on Friday. "Looking for a good result at Road America, after not getting a lot of green last year," said Plumb. "Road America is a really great place. We may not be in favor of the rules package right now, but we need to continue to do everything we are in control of Really Well."

The Road America 200 is the 6th round of the 2012 Grand-Am Continental Tire Sports Car Challenge and the event starts with a promoter test day on Wednesday. First official practice is set for 11:00 AM on Thursday and CTSCC GS qualifying for Friday morning at 10:15 AM.

SCC: Carter and Plumb second in points after Mid-Ohio