SCC: Carter and Plumb second in points after Mid-Ohio 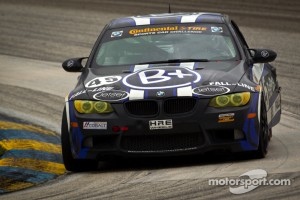 After five of the ten races scheduled in the 2012 Continental Tire Sports Car Challenge, Al Carter and Hugh Plumb are tied for second in the point standings with Matt Plumb and Nick Longhi. They came to Ohio second with an 8 point deficit over their teammates of the 48 car Charles Putman and Charles Espenlaub and they gained ground and are now only one point behind the new championship leaders John Farano and David Empringham.

The 45 B+ Foundation - Jetset Magazine Fall-Line Motorsports BMW of Al Carter and Hugh Plumb finished 7th at Mid-Ohio after a difficult race but the two drivers are on target with their championship goal and will use the next five races at Road America, Watkins Glen, Indianapolis, Laguna Seca and Lime Rock to confirm their winning ambitions.

The race week started on Wednesday for the two B+ racers that visited the Nationwide Children's Hospital in Columbus, Ohio with The B+ Foundation. This is the second year that Al Carter and Hugh Plumb traveled to Columbus as part of the 2012 B+ Foundation Fighting Childhood Cancer Tour and toured the hematology/oncology/bmt unit of the hospital. Carter and Plumb signed autographs and spent time with the children and their families and their presence was really appreciated.

On Thursday for the promoter test day, Carter and Plumb seemed to have a great car and finished the first unofficial day of practice in the top five. The event really started on Friday with two practice sessions followed by qualifying. Al Carter and the entire B+ Foundation Fall-Line team were anticipating a top performance from the driver from Greenville, Delaware but a transmission problem struck at the end of lap 1 and Carter had to park the 45 B+ foundation - Jetset Magazine BMW for the remainder of the session. He had to settle with 12th.

Saturday, it was time to race and the B+ racing fans rooting for the 45 car of Al Carter and Hugh Plumb were looking for an exciting result from their favorite racers. Carter took a good start and handed the car to Hugh Plumb after a nice stint. Plumb ran in second place for a long time before the second pit stop of the day. After this flawless stop for fuel and tires, he had a collision with a lapped car which made him lose several positions. Hugh had to battle hard to come back in the top ten and the driver from Unionville, Pennsylvania crossed the finish line in 7th place.

SCC: Carter and Plumb to continue their championship chase at Road America