The Virginia native was in the Top-10 of the speed charts in every practice session he took part in during the 2013 Roar Before the 24 at Daytona International Speedway and with the Daytona 200 only weeks away, that currently makes Ellis and I-Moto one of the early favorites for victory. 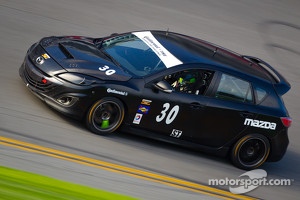 As the 2013 season approaches, Ellis finds himself enjoying life and enjoying racing with a team that won both the GRAND-AM Continental Tire Sports Car Challenge Series Team and Driver Championships respectively a year ago.

These past few test days have shown the rest of the CTSCC paddock that Ellis and his #30 I-Moto MazdaSpeed3 team are ready for a repeat.

“We were able to be Top-3 in nearly every session at the Roar” Ellis stated. “I think it shows how much hard work the team put into the cars and how dedicated they are towards winning a second championship in a row.

Mat and I worked very well together and made some great progress with setup for the race coming in only two weeks’ time. I want to thank everyone on the team for all of their hard work in the off season as I think it really shows.

We all have high expectations for the season and I can't wait to take the track again at Daytona to start working our way towards a championship.”

Ellis and I-MOTO Racing will be back at Daytona International Speedway later this month for the Daytona 200. The event will mark the first on the 2013 Continental Tire Sports Car Challenge Series schedule. Stay tuned for more details and updates!

Marsal warms up in Florida with Daytona 24h testing