Owen Trinker and Corey Fergus will pilot the #197 Honda, while Sarah Cattaneo and Chris Puskar will debut the #198 Honda in the Continental Tire Sports Car Series opener at Daytona.

ORLANDO, Fla.—Armed with a year of experience working with the Honda Civic Si and a veteran team of drivers, RSR Motorsports hopes to start the GRAND-AM Continental Tire Sports Car Challenge season by doing something they have never done before: win at Daytona. 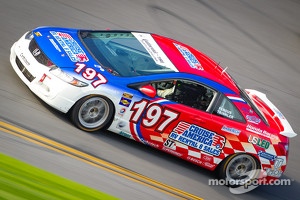 RSR Motorsports first raced a Honda Civic Si at Daytona last year, and now all three of the team’s Street Tuner class entries are Civics. The 2012 season was a chance to learn the car, though success came quickly in the form of a win at New Jersey Motorsports Park and third at Barber Motorsports Park.

Now, RSR has a year of data and experience with the Hondas as they head into Daytona. That experience is coupled with a veteran team of drivers: five of the six RSR Motorsports drivers have raced with the team in the past. The team hopes that consistency will pay off.

Owen Trinkler and Corey Fergus are co-driving the No. 197 Cruise America/Thor Motor Coach Honda Civic Si again this year after a successful 2012. Trinkler notes that the driver pairings for all three cars is important. “Almost everyone has a relationship with this team already, and the chemistry among our drivers will be so strong this year,” he says. “Working together on setups and driver training can have a big impact, and that will help us have three cars in contention for the championship.”

Sarah Cattaneo and Chris Puskar will make their debut as co-drivers of the No. 198 Honda Civic Si at Daytona, but both drivers have plenty of experience—and success—with RSR Motorsports already.

Cattaneo says, “It’s fantastic that everyone is back and it shows how great (team owner) Randy Smalley is and how well he runs his team. They’re one of the best teams out there. I’m so lucky to be back and so excited to be in the new car with them. This year we have driver lineups that put everyone on an equal playing field: an incredible team across the board.”

Tom Dyer is returning to RSR Motorsports, as well, and he will be co-driving with Andrew Novich in the No. 196 Honda. As the sole newcomer to the team, Novich is looking forward to benefitting from the knowledge of his teammates.

“I have experience with the platform, but since I’ve never worked with RSR there may be things I haven’t considered in my previous experience,” Novich says. “RSR is one of the best teams in the paddock and to be on this team is an honor. I’m very grateful for being on this team and I think that we’re going to show what we can do at Daytona. RSR has the best Honda out there, and I’m going to have the quickest teammates I’ve ever had. All of the cars are capable of winning races.”

Noting RSR’s development of the Honda and experienced driver lineup, Trinkler says, “We know the chassis really well from running the car last year, and we really have a shot to win at Daytona. This is the first time we’ve ever been able to approach Daytona with a win in mind.”