AUSTIN, Texas — RSR Motorsports knows that consistent top finishes are what count in the long run to the championship, and that’s exactly what Owen Trinkler and Corey Fergus had in mind when they made a comeback from 18th to 5th in Saturday’s GRAND-AM Continental Tire Sports Car Challenge race at Circuit of the Americas. 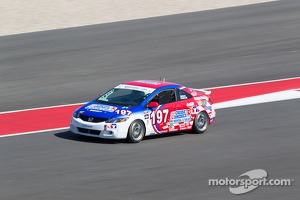 Trinkler and Fergus had fast lap times and a clean race in the No. 197 Cruise America/Thor Motor Coach Honda Civic Si, but a pit stop infraction gave them an unexpected challenge.

Fergus handled qualifying in the Honda, and he put RSR Motorsports on the front row of the ST class after qualifying second with a lap time of 2:28.370 around the 20-turn, 3.4-mile track.

One of the things that helped Fergus qualify so well was the team effort at RSR Motorsports, where all six drivers worked together to learn the new track. “It’s a great advantage to have a three-car team. Everybody is on task and we can focus on what we need to do. At Circuit of the Americas, it enabled us to focus on our qualifying effort,” Fergus says. He adds, “Like studying for an exam, you have to study a track before you go there. That preparation paid off. One of my strong suits is adapting to new tracks quickly because of my autocross background, which serves me well when I visit a new track.”

Fergus led the ST class for 13 laps, a new personal record. He pitted during a caution and Trinkler took over, but because of the pit stop infraction, he had to fight his way back from 18th.

“The car was really good all weekend. The guys have worked really hard since Daytona to make sure we had the setups and handling we’d need for Austin,” says Trinkler. As for his final push to fifth, he says, “I just tried to be smart about it: there’s not a scratch on the car. We weren’t able to win the race, but we gained valuable points, so we’re in a good position right now.”

Sarah Cattaneo and Chris Puskar finished 24th in the No. 198 RSR Motorsports Honda Civic Si. They were running in the top 15 before a flat tire set them back. Andrew Novich and Tom Dyer had an early end after their No. 196 US LED/Thor Motor Coach Honda Civic Si retired with a broken half shaft following contact with another car.

B+ Racing's Carter and Plumb disappointed with COTA finish