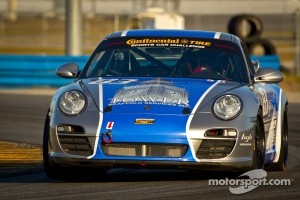 Randall most recently completed his first full season of Continental Tire GS competition behind the wheel of a Ford Mustang Boss 302R and is enjoying the rear-engine Porsche’s handling. Ken Wilden is a household name north of the border, and has a long résumé in North American sports car racing, bringing the experience of a veteran road racer that has earned 4 Driver’s Championships, with experience in Toyota Atlantic, American Le Mans Series and Grand-Am Daytona Prototype competition. Most recently Wilden won the 2009 Continental Tire GS Driver’s Championship and he is one of only two current drivers to podium in every Grand-Am class of competition. He knows what it takes to bring home the season ending hardware, and is also enjoying his first time running a Porsche in Grand-Am season competition. Randall and Wilden will be every bit as competitive as BGB’s 2012 driver pairing.

John Tecce added: “We are very fortunate to have landed Rod, who wanted to run with Kenny in an attempt to repeat a Driver’s Championship effort for 2013. Ken is always fast in everything he drives and we have raced for years against him. He is definitely one of the driver’s that makes me nervous when he’s gassed up and ready to go to the end of the race, as he can threaten the win. It has been a pleasure thus far working with Rod and his son DJ who will be in the Rebel Rock Porsche at Daytona. We have had a few test days together now and we are all gelling very well. I think we’re going to be very competitive.”

Rod Randall is looking forward to being able to marry his love of Porsches and his racing of them on the track, something that has eluded him for some time, until now:

“I have always been a Porsche guy and we are both liking the way the Porsche handles and brakes. This year will be a lot of fun and I think we will be very competitive.”

Ken Wilden had more to add: “I'm very excited for the 2013 season, BGB is a great team as was seen in 2012 and I look forward to the challenge of completing a back to back team championship effort. To be back with Rod again is fantastic, as we work really well together and team manager John has been very easy to work with. We have all the right ingredients for a great season.”