For the second consecutive race, John Pew was once again a powerhouse in qualifying.

Lexington, Ohio – Michael Shank Racing will start from eighth and ninth on the Diamond Cellar Classic grid on Saturday. The team will look to score a trophy with new sponsor Roberts Electrical Construction Company in the home race as the GRAND-AM Rolex Sports Car Series stages Round 6 of the 2013 championship at the Mid-Ohio Sports Car Course.

The race weekend has been the culmination of hours of hard work from the team, which has rallied to have two strong Ford-powered Riley machines ready to go after suffering a serious setback with the No. 60 Roberts Construction entry in Detroit. 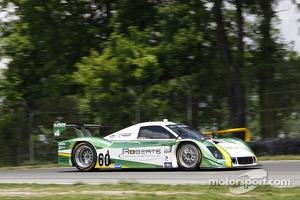 The race weekend also marks the return to Rolex Series action for Ozz Negri, who was immediately right on the pace as he rejoined the squad to share the driving duties with John Pew in the striking new livery that boasts the Roberts color scheme for the race weekend.

For the second consecutive race, Pew was once again a powerhouse in qualifying, netting a fast lap time of 1:18.39-seconds to score ninth on the grid. The time is also the second race in a row to see Pew set a quick time less than one second off the pole-winners.

“It’s great to have Ozz back,” said Pew. “We worked really hard on the car. It was really fast right off the trailer so we made minor tweaks all along. It's a really good car. We'll make some adjustments for the race and I think we'll have a really good racecar. I'm happy.

It's ninth place, but when you look at the lap times they're really, really close. So it's going to be interesting because the first turns after the start is two by two and a lot can happen. I have to give Ozz that car in one piece but we're still going to push for that space in front of me - I have to go for it."

The sister No. 6 Ford-Riley of Gustavo Yacaman and Antonio Pizzonia will take the green flag from the fourth row after Yacaman posted a quick time of 1:17.822 seconds in his first visit to the track in Daytona Prototype competition.

“We don't know what's going on,” said Yacaman after a frustrating session. “I'm really not happy with a qualifying result of eighth. I don’t know because the car doesn’t feel terribly bad, it's just not a fast car. So we need to figure out what the car needs in order to be a fast car and then just see what we can do for the race and move forward.”

The Mid-Ohio weekend is traditionally a highlight event for Michael Shank Racing, and with a record that has seen both highs and lows for the popular home team, the group is hoping that the many hours spent preparing turn into a good day at the races on Saturday.

“I'm just happy for John (Pew) because he works at this so hard,” said team owner Mike Shank. “With the No. 6 car, we are still struggling in qualifying with it and that's a big issue and we're not totally sure why. We seem to be okay in the races but we're missing something there that we're trying to tackle as soon as possible.

So we'll see what happens tomorrow. This is the most flat-out weekend of the year for me but every year it is the same thing--so great to be here with this kind of support. Not just from companies like Roberts Electrical Construction, but also all our friends and family as well. Hopefully we can do everyone proud tomorrow.”