Pruett eager for challenge 2014 will present

Scott Pruett looks toward the future with the knowledge of the past as a multiple champion and a victor in major races.

One has to feel that a guy like Scott Pruett is a big fan of the merger of the GRAND-AM Rolex Series and the American Le Mans Series presented by Tequila Patrón. It’s easy to suspect that deep down, Pruett might feel he has something to prove and the merger will facilitate that desire.

That’s one line of thought. Another would hold that Pruett has nothing to prove, considering a career in which his five Rolex Series Daytona Prototype championships are actually an addendum to previous accomplishment.

Here’s the rub. Back in 1999 and 2000 when sports car racing split into two factions, GRAND-AM and ALMS, a tremendous talent pool was likewise divided. Since, some skeptics have inevitably wanted to place asterisks next to all championships. Next year, then, is partly about asterisk removal, when the Rolex Series’ DP class and the ALMS’ P2 and DeltaWing cars combine into the new Prototype class. 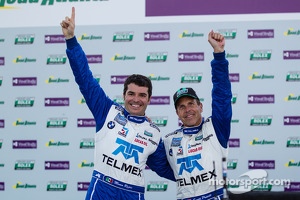 If Pruett, along with his longtime co-driver Memo Rojas, can deliver another title to owner Chip Ganassi next year, it would be validation of sorts for Pruett’s efforts over the last 13 years.

That’s not to imply he needs any validation.  Just sayin’ it wouldn’t hurt.

“My five GRAND-AM championships, that’s less than half of the championships I’ve won in my career,” said the 53-year-old Pruett, who in what might seem to some like another life, was one of America’s premier production-based road racers.

Three Trans-Am championships and two IMSA Camel GTO titles actually form the foundation of Pruett’s legacy. Four of those titles came in the 1980s, leading to rides in the Champ Car World Series and in NASCAR, where he got a brief shot driving the famed “Tide Machine” Chevrolet for Rick Hendrick.

None of those highlights, by the way, have even a hint of an asterisk.

“I’m excited [for the merger] but not for personal reasons,” Pruett said. “It’s more for global reasons. I’m a guy who’s lived through all the ups and downs in racing. Trans-Am in its hey-day. IMSA in its hey-day. And what happened in IndyCar with the fracture between the two series.

“I’m excited on a bigger level. I can see that this incredible, new road racing series could be reminiscent of what we had in the 1980s. … My hope is that we can achieve that again.”

Fittipaldi fifth on grid for Action Express at Road America