DAYTONA BEACH, Fla. - After 678 laps around the 3.56-mile Daytona International Speedway, the GT class battle between Porsche, Audi and Ferrari came down to fuel strategy and the timing of pit stops. 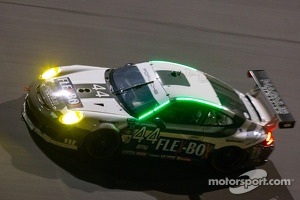 The #44 Magnus Racing Porsche 911 GT3 Cup car, with John Potter/Andy Lally/Nicolas Armindo/Richard Lietz, while in second place, came in for an extra splash of fuel with an hour to go to avoid an extra pit stop, but the 35 seconds they lost was too much to overcome as the Alex Job Racing Audi scored a narrow victory at the 51st running of the Rolex 24 at Daytona. The Magnus Porsche finished fifth.

The Alex Job Racing WeatherTech Porsche 911 GT3 Cup also had a chance to win late in the event, but their effort to save fuel not only allowed several rivals to get by them , but ended up stopping on the last lap for fuel anyway. Jeroen Bleekemolen/Damien Faulkner/Marco Holzer/Cooper MacNeil finished sixth in GT.

Other Porsches that ran well during the event included the Snow Racing/Wright Motorsports Porsche of the mother/son team of Melanie and Madison Snow, Sascha Maassen, Marco Seefried and Klaus Bachler was 11th after leading the GT class halfway through the event, with a torn brake line heading their list of items that set them back.

Among the Porsches that started strong, but ran into trouble included the Momo NGT Porsche of Henrique Cisneros/Sean Edwards/Kuba Giermaziak/Patrick Pilet entry, which was in the top three for much of the event before a collapsed suspension ended their day.

Pole-sitter Nick Tandy, who lead the GT class early in the event in the Konrad Racing/Orbit Racing Porsche he shared with Lance Willsey/Michael Christensen/Christian Engelhart, was hit, sustaining major body damage, causing problems later on and finally a DNF.

The Brumos Racing Porsche 911 GT3 Cup of Marc Lieb/Leh Keen/Andrew Davis/Bryan Sellers finished 13th after losing its clutch early in the race, and finally lost its gearbox in the last five minutes.

The Park Place Porsche, with Patrick Lindsey/Patrick Long/Spencer Pumpelly/Daniel Graeff/Jason Hart was slowed by a broken sway bar and a flat tire, and fell back early as well.

During the night, Rubens Barrichello, former F1 star from Brazil, coasted to a stop after losing the engine in the Dener Motorsports Porsche 911 GT3 Cup.

McNish vows to return after enduring disappointment in Daytona “classic”