Kansas Speedway will host the GRAND-AM Rolex Sports Car Series for the first time on Saturday night. In the Continental Tire Sports Car Challenge, Plumb and Longhi can clinch the GS title in Kansas City.

Alex Popow and Ryan Dalziel, drivers of the No. 2 Soloson BMW/Riley, saw their lead in the Daytona Prototype championship trimmed to four points in last weekend’s VISITFLORIDA.com 250 at Road America. Now, it’s a first-time visit to Kansas Speedway for Saturday evening’s SFP Grand Prix, and the Starworks Motorsport drivers are trying to hold on to the lead with only three races remaining in the 2013 Rolex Sports Car Series season.

Popow and Dalziel, who won the Brickyard Grand Prix, lead GAINSCO/Bob Stallings Racing drivers Alex Gurney and Jon Fogarty for the championship lead, 246-242, while three other sets of drivers are within 14 points of the top spot.

Dalziel and Popow entered Road America leading by 10 points, but became the third points leader to experience misfortune when their BMW/Riley suffered mechanical problems exiting pit road. Dalziel shut off the car and pulled over rather than risk further damage, resulting in a 14th-place finish. 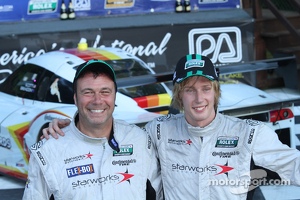 All was not lost for the team, though, as first-year DP driver Brendon Hartley and Scott Mayer took a popular victory in the No. 8 Starworks BMW/Riley.

Both Chip Ganassi Racing with Felix Sabates and Wayne Taylor Racing won two races and led the standings earlier this year, before back-to-back problems sent both teams tumbling out of the lead.

Ganassi’s Scott Pruett and Memo Rojas won two races earlier this season at Daytona and Road Atlanta in quest of a fourth consecutive title, but incidents at Detroit and Mid-Ohio dropped them in the standings. They finished second at Indianapolis and fourth at Road America in the No. 01 Telcel/TELMEX BMW/Riley and are now sixth in the standings, 14 behind the leaders.

Action Express Racing teammates Christian Fittipaldi and Joao Barbosa also had back-to-back success and misfortune this year that hurt their title aspirations. They won at Mid-Ohio and Watkins Glen earlier this summer before finishing 14th at Indy. They bounced back to finish second at Road America, moving Fittipaldi to third in the standings with 239 points, followed by Barbosa with 237.

GRAND-AM will compete for the first time at Kansas Speedway with this weekend’s SFP Grand Prix, running under the lights on Saturday. The Friday-Saturday event features the premier Rolex Sports Car Series in addition to the Continental Tire Sports Car Challenge and the Lamborghini Super Trofeo.

The races will be held on a 2.37-mile layout that includes a six-turn infield road course in addition to most of the 1.5-mile banked speedway, located in Kansas City, Kansas.

The two hour, 45 minute timed race begins at 7 p.m. CT on Saturday evening. The race will be televised live on Fox Sports 2 (8 p.m. ET), and will be rebroadcast on Fox Sports 1 on Sunday at 4 p.m. ET. 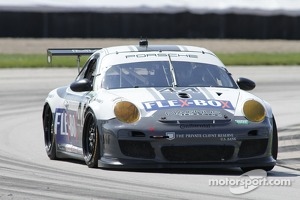 Andy Lally and John Potter hold a seven-point lead atop the Rolex Series production-based GT class on the basis of consistency in the No. 44 Magnus Racing Flex-Box Porsche GT3. Entering Saturday’s SFP Grand Prix, they have finished sixth or better in every event this season. The pair had three straight podium finishes, taking second at Mid-Ohio and third at Watkins Glen and Indianapolis, before finishing fifth at Road America.

Robin Liddell and John Edwards have won four of the nine races in the No. 57 Stevenson Auto Group Chevrolet Camaro GT.R, but three finishes of 10th or worse have them running second in the points (255-248). Edwards and Liddell followed up their victories at Barber Motorsports Park, Road Atlanta, Detroit and Watkins Glen International by finishing second at the Brickyard Grand Prix.

Scuderia Corsa driver Alessandro Balzan – who now co-drives with two-time GT champion Leh Keen in the No. 63 Ferrari 458 Italia – is third in the points with 244, followed by AIM Autosport Team FXDD Ferrari drivers Emil Assentato and Anthony Lazzaro, with 215.

Bill Auberlen and Paul Dalla Lana are three-time winners this season in the No. 94 Turner Motorsport BMW M3. They won last weekend’s event at Road America in addition to GT races earlier this season at Circuit of The Americas and Mid-Ohio. Other top contenders in GT include two-time GT champion Jeff Segal in the Indianapolis-winning No. 61 R.Ferri/AIM Motorsport Ferrari 458 – and Patrick Long and Patrick Lindsey in the No. 73 Park Place Motorsports Porsche GT3.

Alex Tagliani returns to the Rolex Series at Kansas Speedway, subbing for Max Papis in the No. 61 R.Ferri/AIM Motorsport Ferrari 458 co-driven by Jeff Segal. Papis will be racing in the NASCAR Nationwide Series race at Mid-Ohio. With Papis in the NASCAR Sprint Cup Series race at Watkins Glen last week, Ken Wilden filled in and finished a solid fourth, leading 20 laps at Road America.

Tagliani ran at both Montreal and Mazda Raceway Laguna Seca in 2012. He drove both of Starworks Motorsport’s DPs in both events, with a best finish of third at Mazda Raceway. The Canadian also ran in five Rolex Series races for Blackforest Motorsports in 2007, in addition to five Continental Tire Sports Car Challenge races with that team in 2006-07.

Tagliani is one of three drivers with prior Kansas Speedway experience, joining fellow IZOD IndyCar Series racer Justin Wilson and Christian Fittipaldi. Tagiani finished eighth in the 2005 IndyCar event, while Wilson’s best finish in three races was ninth in 2008. Fittipaldi competed in the NASCAR Nationwide Series race in 2002. However, all three raced on the oval before it was reconfigured to variable banking.

· Fall-Line Motorsports owner Mark Boden will co-drive his team’s Audi R8 for the first time, paired with regular Continental Tire Sports Car Challenge teammate Bryan Sellers. The pair were recent back-to-back winners in the CTSCC at Watkins Glen and Indianapolis. Boden made his Rolex Series debut at the 2013 Rolex 24 At Daytona with Magnus Racing.

· Team Sahlen is coming off its best showing in its rookie season in the DP ranks at Road America. Dane Cameron won his first DP pole, and joined Wayne Nonnamaker in leading the opening 38 laps through Nonnamaker’s pit stop. Cameron worked his way back into the lead but went out with a broken axle with 17 laps remaining.

· Spencer Pumpelly had quite a weekend at Road America leading both GRAND-AM races on Saturday before winning the American Le Mans Series presented by Tequila Patrón race in the GTC class on Sunday for Flying Lizard Motorsports.

Nick Longhi and Matt Plumb have taken command of the Grand Sport (GS) championship in the Continental Tire Sports Car Challenge, and are in a position to clinch the title this weekend at Kansas Speedway.

The drivers of the No. 13 Billfish Foundation/Rum Bum Film and HD Studios Porsche 997 can clinch the second consecutive team title for Rum Bum Racing and their first drivers’ championship by gaining 17 points on the second-place competitors.

Plumb and Longhi are coming off their third victory of the season at Road America, opening up a 54-point lead over Matt Bell and John Edwards, 244-190. The No. 9 Stevenson Auto Group Chevrolet Camaro GS.R experienced problems in the opening laps, finishing six laps down in 17th. Bell and Edwards scored three podium finishes this season, including a win at Road Atlanta, but 20th at Indianapolis and last weekend’s problems hurt them in the championship.

Scott Maxwell and Jade Buford are third in the championship with 183 points. Buford leads the series with five pole positions in the No. 55 Multimatic Motorsports Aston Martin Vantage, with a three-race pole streak ended when he qualified fourth at Road America.

Mosing, Combs In Hot Seat, ST Championship Up For Grabs

Jeff Mosing and Jesse Combs overcame a penalty at Road America while many of their rivals encountered problems as they moved from third to first in the wide-open Street Tuner (ST) championship.

Mosing and Combs moved from deep in the pack to finish second in the No. 56 RACE EPIC/Murillo BMW 328i. Their rivals for the title fight were not as fortunate.

Mike LaMarra and Terry Borcheller entered the race leading the standings, but the drivers of the No. 23 Burton Racing BMW 128i broke a wheel bearing and finished 23rd. They are now six points behind (189-183). Losing a lap due to contact was the No. 76 Compass360 Racing Honda Civic Si of Kyle Gimple and Ryan Eversley, resulting in a 16th place finish. They are now third with 182 points.

· Bryan Sellers returns to the No. 46 Fall-Line Motorsports BMW M3, joining Mark Boden. Sellers won his last two races in the series at Watkins Glen and Indianapolis, but missed Road America due to a schedule conflict.

· It’s hard to believe, but the Aston Martin Vantage has yet to win in Grand Sport competition. Nick Mancuso came within 1.932 seconds of scoring that first victory at Road America, joining Frank Montecalvo in the No. 15 Multimatic Motorsports entry. ... Another strong Aston Martin was the Automatic Racing No. 140 Invisible Glass/Rouge Engineering entry of Kris Wilson and Max Riddle, which led five laps and finished 13th.

· Bryan Heitkotter didn’t miss a beat in his first CTSCC start of the season, winning the GS pole at Road America in Kevin Doran’s No. 14 Calcium Pro Nissan 370Z.