Pole on Friday, victory on Saturday, and the championship points lead heading to the next race was just what the doctor ordered for Max Angelelli, Jordan Taylor and the entire No. 10 Velocity Worldwide Corvette Dallara DP team for Wayne Taylor Racing on the Streets of Belle Isle in downtown Detroit this weekend. 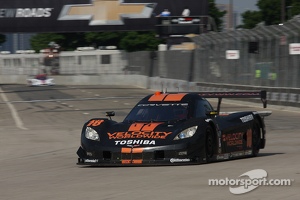 The 22-year-old Taylor blazed to his first career Daytona Prototype-class pole late Friday. Halfway through the noon hour today, he, Angelelli and the Velocity Worldwide pit crew began their domination of this second running of the Chevrolet GRAND-AM 200 Rolex Series race en route to their second victory in five races this season.

Angelelli and Taylor led a race-high 45 of 61 laps and, after what’s come to be a typical lightning-fast pit stop by their crew, they took the lead for good just past the halfway point of today’s two-hour race and never looked back.

Most importantly, the No. 10 Velocity Worldwide Corvette DP team jumped from third to first in the Rolex Series championship, leading a four-team logjam at the top separated by just four points. What enabled the huge jump in the points was a first-lap incident that ended the day of the No. 01 Chip Ganassi Racing with Felix Sabates BMW Riley duo of Scott Pruett and Memo Rojas, who started the day with a 15-point lead over Angelelli and Taylor and a seven-point lead over the No. 99 Gainsco/Bob Stallings Racing Corvette DP duo of Alex Gurney and Jon Fogarty. The Gainsco Corvette DP finished sixth today.

Meanwhile, the Velocity Worldwide team stayed out of trouble at the front of the pack for all but 16 tours of the 2.36-mile, 13-turn Belle Isle street circuit and closed the deal with Angelelli’s ability to hold off the hard-charging Joao Barbosa in the No. 5 Action Express Racing Corvette DP in the closing laps. The veteran Italian led the final 28 laps of today’s 61-lap event thanks to the pit stop with 55 minutes remaining that moved the No. 10 Velocity Worldwide Corvette DP from second to first.

“It feels great for Chevy and the entire Wayne Taylor Racing team,” said Angelelli, whose victory was the 23rd of his Rolex Series career – third-best all-time. “Our Velocity Worldwide Corvette DP performed incredibly well. The guys did an excellent job in the pits. Once again, this is a team win. They enabled me to get to the lead. They executed, we delivered. Just a big thanks to Velocity Worldwide and Team Chevy. Our Corvette Dallara was just great.

At the end, I realized that I was good in the corners that were important – turns three and seven. We had good top speed and good braking. Barbosa was closer in the first-gear corners and the very tight sections. He was very fair and it was hard racing. The beauty of this series is that it’s really impossible to say you are in a good spot. If you miss a race or have a bad weekend, it takes a long time to recover. Anything can happen and the championship is still really wide open. There are seven cars that can contend.”

Taylor, who co-drove to last year’s GT-class victory here alongside Paul Edwards in the No. 88 Autohaus Motorsports Camaro GT.R, led the opening 17 laps of the race despite slight handling troubles. Alex Popow in the No. 2 Starworks Motorsport Ford Riley was in hot pursuit of Taylor for the entire opening stint and was finally able to get by on lap 18. Popow stayed in front until a caution period at the race’s halfway point brought the field down pit lane on lap 34 for final scheduled fuel-and-tire stops.

“It was a good race,” Taylor said after his second career Daytona Prototype-class win to go with two GT-class victories. “We were running first and then second for a while in the first stint, and then brought the car and the Velocity guys got the car out front like they had all year and made it a little easier on us drivers. Max definitely put in some good laps at the end and held the gap over Barbosa and got the win for Corvette here in Detroit.

It was good to start up front, especially on a track like Detroit, where it’s a street course and you don’t have a lot of places to pass. Track position was crucial and once we lost the spot to the 2 car (Popow), we were a little worried but we knew we had the guys in the pits to make it up for us.

We held the track position for most of the race and coming out of the pits in the lead was the turning point in the race for us. I think qualifying up front in races like these, with how competitive it is in this series, is going to make the difference.”

With the win, the No. 10 Velocity Worldwide Corvette DP leads Pruett and Rojas in the Ganassi BMW by one point, 148-147, with Gurney and Fogarty another point back in third with 146 points, and the No. 2 Starworks duo of Barbosa and Ryan Dalziel two points behind that at 144. Seven races remain on the 2013 Rolex Series calendar.

“It’s pretty incredible,” said team owner Wayne Taylor, who co-drove with Angelelli to the 2005 Rolex Series title and whose team scored its previous victory this season at Barber Motorsports Park in Birmingham, Ala. “Everything is about timing. This was a major day for General Motors and the Corvette brand. I must say this team just executed perfectly.

The drivers did spectacularly. Jordan got his first (Daytona Prototype-class) pole. Max, as usual, just finished strong. And, the great thing is, we managed to get into the lead in the points championship. We got some great momentum here. It’s a great day for Team Chevy. Thanks to Velocity, Toshiba, all my partners – SunTrust, Dallara, Siemens. It’s great.”

The GRAND-AM Rolex Sports Car Series competitors take a weekend off before resuming the 2013 campaign with their annual stop at the Mid-Ohio Sports Car Course in Lexington. The newly named event is now called the Diamond Cellar Classic and is set for Saturday (June 15) with SPEED providing the live television broadcast at 4:30 p.m. EDT.