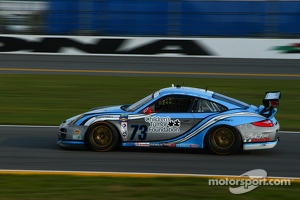 After running as high as second in the opening minutes of the day-long race, the team quickly slipped into a race of mixed fortunes that saw the No. 73 Park Place Motorsports/Racing4Research Porsche GT3 team encounter virtually every type of hardship the Rolex 24 At Daytona can throw at a team and drivers.

Between a wheel issue on a pit stop, a three minute stop-and-hold penalty for an improper wave-around and heavy contact in Daytona’s “Bus Stop,” the No. 73 was dealt a deck of cards that would ordinarily be difficult to overcome. Still, on every occasion, the team bounced back and made repairs to keep the car running and see the checkered flag in an eventual 16th place in the 34-car GT class.

“This year’s Rolex 24 with Park Place Motorsports and the Children’s Tumor Foundation Racing4Research program kind of exemplified to the families that are supporting us, in the way we raced,” Hart said. “We were up against enormous racing opposition, and the theme throughout the entire time was always never quit. We ran race strategy, in order to get laps back, until the end. We were 23 laps back but it didn’t matter to us. We were going to do everything we could to get that finish and every lap we could get back, every spot we could attain.

“I’m bummed because we had the car to win if we didn’t have the adversity that we had,” Hart added. “We fought for everything we had. That to me, means something because we don’t have to go through what the families do in their fight with NF. The fight they go through, they never give up and we never give up. It felt like a small win and that’s my big takeaway.”

The only inspiration the No. 73 squad needed to stay the course during the rough Rolex 24 literally surrounded them all weekend. The Children’s Tumor Foundation is dedicated to improving the health and well-being of individuals and families affected by Neurofibromatosis (NF), a common yet under-recognized genetic disorder that causes tumors to grow on nerves throughout the body. Neurofibromatosis can lead to blindness, bone abnormalities, cancer and excruciating and disabling pain.

“It’s the resiliency of this team and drivers who all dug deep to give us this finish,” said Graeff, who has been a part of all six CTF/R4R Rolex 24 At Daytona driving efforts. “The most important aspect of it is that I had more than one child with NF come up to me and say, ‘Thanks for not quitting.’ So that’s what it comes down to, and ultimately the reward. Yes, I want to win this race, and I want a watch, but I’ll take hearing that any day.”

There were positives from a pace standpoint too, particularly during Long’s and Pumpelly’s stints in the car. Long often ran triple stints and turned in some of the race’s fastest laps. From 30th place, after Long’s first unscheduled pit stop, the car climbed to as high as 14th.

“If people didn’t notice what Park Place Motorsports is yet, they’re going to,” said Long, Porsche’s only American factory driver. “We have to look at what we did, and not what could have been. Getting to the finish for CTF and the NF Heroes was one of our two objectives, but for the other one, it was not our day.

“When the sun was out and everyone had to make their tires live, no one would deny we were as good as anybody,” Long added. “I can’t say ‘the best’ because I didn’t see everyone’s lap times, but I know we were close to the guys who battled at the end. We had a little more grip on the forward drive, and that’s a testament to John Horton and the engineering side.”

There were many ‘firsts’ this race for the No. 73. It marked Lindsey and Hart’s first Rolex 24 start, the first for the new Park Place Motorsports team and first for PPM in partnership with the Children’s Tumor Foundation and Racing4Research. From that standpoint, the race was a success.

“It was certainly a new experience for us,” Lindsey said. “It’s a new team in name, but with a lot of experience. Luckily we had that, because we had a lot of bad things happen. But like our NF Heroes, we can’t give up, and we can’t lose hope. We went on and fought really hard. We have always shown our speed but we didn’t have the finish we wanted.”

Park Place Motorsports’ second car, the No. 72 Park Place Motorsports/Vess Energy Services Porsche GT3, driven by Mike Vess, JF Dumoulin, Grant Phipps, Chuck Cole and Mike Skeen, also features the CTF logo and recorded a top-15 finish, 14th place in the 34-car entry. The pair of CTF/R4R GT3s crossed the finish line in tandem for what appeared to be the only staged photo finish of the race.