The hard-earned runner-up result was the second of the season for Park Place and “Team Patrick” after the duo first hit the podium with a second-place finish in April at Road Atlanta. Saturday’s result also was the latest top-three showing in what has been an amazing podium-run of success for CTF/R4R partner racing teams this season in not only GRAND-AM but also the top-tier GT division of the Pirelli World Challenge. 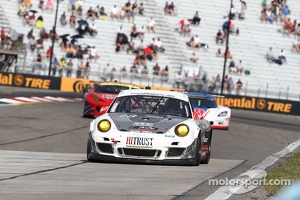 The CTF and its unique R4R program is dedicated to improving the health and well-being of individuals and families affected by Neurofibromatosis, a common yet under-recognized genetic disorder that causes tumors to grow on nerves throughout the body.

Neurofibromatosis – known as NF – can lead to blindness, bone abnormalities, cancer and excruciating and disabling pain. Donations to CTF/R4R can be made directly at www.Racing4Research.org.

Found in one of every 3,000 children born, NF is a more common disorder than many more widely known illnesses, including cystic fibrosis and Duchenne muscular dystrophy. The CTF/R4R program raises awareness and funds for research in the fight against NF through a busy and diverse racing program that includes an annual Rolex 24 At Daytona campaign, 2013’s full-season GRAND-AM Rolex Series effort and a second-consecutive season-long effort in Pirelli World Challenge.

Saturday at Road America, Long was in the middle of a hectic battle for the victory throughout the race’s final hour. He led six laps in the late stages and only gave up the top spot to Bill Auberlen’s race-winning BMW.

“It’s great when you have a good battle for the win, and CTF is on the side of the car,” Long said. “But what’s more important is that those kids are at home watching us, cheering us on and they’re watching how we’re struggling, and fighting, and coming back and leading. It’s all about battling and keeping our heads down, fighting for the kids, and trying to inspire them like they inspire us.”

Lindsey started the No. 73 Porsche at Road America and put in one of his best drives of the season in a competitive race-opening stint.

“It’s always a fight and nothing comes easy, and it always seems like we’re overcoming a challenge,” Lindsey said. “But it doesn’t even faze the team at this point. We will overcome any obstacle, like these kids work to do. Today, second place was hard fought because the BMW was in a league of its own. But second feels like a win; it shows our progress as a team, and the result for the kids at home is fantastic. It makes us feel warm and fuzzy inside knowing they can celebrate with us.”

While Park Place gave CTF/R4R its most recent podium on Saturday, 2013 has seen partner teams and drivers deliver an amazing and unprecedented run of top-three finishes – and the wide exposure that comes with these victory lane results – since the very first race of the season. Through Saturday’s race at Road America, CTF/R4R partner teams have combined for 18 total podium finishes this year, including six victories.

In addition to Park Place, four other major road racing teams have contributed to the impressive podium tally. Leading all with eight, including three wins, is Pirelli World Challenge GT title contenders GMG Audi and driver James Sofronas. TELMEX/Chip Ganassi Racing, with lead drivers Scott Pruett and Memo Rojas, is also running the CTF logo this year and has chalked up four podiums for the cause, including the overall Rolex 24 At Daytona victory and another win at Road Atlanta.

“We are very proud of all of the Children’s Tumor Foundation Racing4Research teams racing with such success in support of our special ‘NF Heroes’ this year,” said Children’s Tumor Foundation Racing4Research National Program Director Jill Beck. “The great on-track results give us even better exposure and some valuable increased awareness for this season’s fundraising campaign.”

Aptly named for their tireless courage in fighting the disorder, “NF Heroes” are the brave young people battling NF who instantly become an amazing source of inspiration for the teams and drivers racing in their support. Hundreds of “NF Heroes” and their families have attended CTF/R4R supported races this year and no doubt were tuned into SPEED’s live coverage of the Road America race this past weekend.

Next up for CTF/R4R is the SFP Grand Prix inaugural GRAND-AM Road Racing event this week at Kansas Speedway, August 16 – 17. Lindsey, Long and Park Place, Pruett, Rojas and Ganassi and Eversley, Gimple and Compass360 will once again be racing for CTF/R4R in Kansas.