Ingolstadt/Daytona - At the Daytona 24 Hours, the Audi R8 GRAND-AM has made its best showing to date: Filipe Albuquerque/Oliver Jarvis/Edoardo Mortara/Dion von Moltke won the GT category in a dramatic finale. The runners-up trailing the winners by 1.4 seconds were Ian Baas/Marc Basseng/René Rast/Frank Stippler. 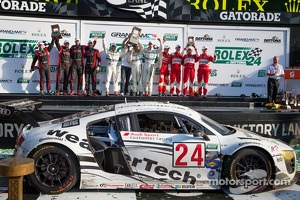 Despite 65 percent of each lap having been driven at full throttle the R8 GRAND-AM that is powered by a production- derived 5.2-liter V10 FSI engine was running flawlessly on the notorious oval track for a whole day and night. With the class victory at Daytona Audi, under factory commitments or in cooperation with its customers, has now won the world’s most important 24-hour races.

The latest evolution of the Audi R8 GRAND-AM experienced a successful baptism of fire in the toughest GRAND-AM race of the year. All four of the updated customer sport race cars for the United States were running with technical perfection all the way up to the finish of the 24-hour race. Each of the three race teams had the lead at least once and a chance of clinching victory until the very end. "We achieved this dream result at what was only our second attempt at Daytona," enthused Romolo Liebchen, Head of Audi Sport customer racing. "With that, the R8 GRAND-AM in the United States is continuing the string of successes of its GT3 sister model that has clinched a total of five overall victories at European 24-hour races in the past two years."

Alex Job Racing in the end was the best Audi team. Right in the first quarter of the race the squad provided the first Audi driver - Edoardo Mortara (F/I) - to take the lead in the GT class. Afterward, Dion von Moltke (USA), Filipe Albuquerque (P) and Oliver Jarvis (GB) in the white R8 GRAND-AM set the pace as well. But spins and time penalties then caused car number "24" to drop back several times. Particularly controversial was a 30-second penalty that was imposed after Edoardo Mortara had spun and a competitor was allegedly obstructed in the incident. Factually, though, Mortara had lost a position due to his excursion. Filipe Albuquerque stood up to the pressure exerted by his brand colleagues in the dramatic final phase. For him, as for Mortara and Jarvis, this meant victory on debuting at Daytona.

An impressive performance was delivered by the runner-up team as well. Thanks to their superb fighting spirit Team APR Motorsport with its drivers Ian Baas/Marc Basseng/René Rast/Frank Stippler (USA/D/D/D) kept making up ground - on Sunday morning, car number "52" had still been far behind. Despite a drive-through penalty in the first quarter of the race René Rast took the lead from his brand colleague Filipe Albuquerque in the eighth hour. Shortly before midnight, Marc Basseng was running in front when he received a time penalty due to incorrect overtaking during the safety car period. Later, Ian Baas was hit by a Daytona prototype. So the black-white-red R8 was short of three laps when the sun rose. With a clever pit stop strategy, though, the team recovered the laps it had lost within just a few hours. René Rast managed a dramatic recovery, as the German was battling for victory trailing the leader by merely a meter throughout the last hour of the race. Rast and his team had to admit defeat by a very narrow margin.

In the initial phase, Rum Bum Racing was the quickest team within the Audi Sport customer racing squad. Frank Biela/Christopher Haase/Matt Plumb/Markus Winkelhock (D/D/USA/D) in car number "13" lost ground for the first time at the race’s mid-point due to a stop-and-go penalty. On Sunday morning, Markus Winkelhock took the lead in the GT class. Due to a wrong overtaking maneuver in a caution period the German lost two laps after receiving a time penalty. The team battled and recaptured the lap of the leader up to the final phase. The checkered flag and second place were almost in Winkelhock’s sight when the team’s bold strategy failed to pay off: on the last lap of the race his car ended up coasting due to a lack of fuel.

Audi’s first 24-hour victory in the United States completes an impressive track record. After eleven victories at Le Mans plus the successes of the R8 LMS at Spa, Zolder and the Nürburgring, Audi - thanks to its customer teams at Daytona - has decided another classic 24-hour race in its favor.