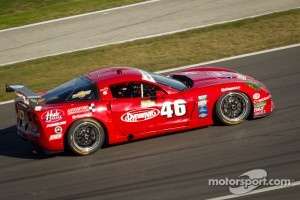 DETROIT - Race car driver Jeff Nowicki will rejoin Michael Baughman Racing driving the No. 46 Matick Chevrolet / ITS Partners / Team MBR Corvette at the Chevrolet Belle Isle Detroit Grand Prix. The Katech powered Corvette C6 will participate in the highly competitive Rolex Series GT division. The action gets underway with an 8:35am and 1:20pm practice session Friday, June 1, with GT qualifying scheduled for 5:05pm the same day. The Grand Am cars will have one final practice on Saturday at 11am. The Chevrolet GRAND-AM 200 at Belle Isle presented by Metro Detroit Chevy Dealers will take the green flag at 5:05pm Saturday, June 2, 2012. The race will air live on SPEED.

"We're really looking forward to participating with Team MBR and being part of the action at the Chevrolet Belle Isle Detroit Grand Prix," said Karl Zimmerman, owner of Matick Chevrolet. "This beats being a sign on the wall… it puts Matick Chevrolet down on the field as a player in the game. This is a perfect fit in helping strengthen our Corvette program and giving it exposure at a national level."

The Detroit Grand Prix at Belle Isle has a rich history throughout the years. Beginning in 1982 and featuring Formula 1 open wheel cars racing on the downtown streets, the Motor City enjoyed a seven-year run of world class racing. Most notably were the three back-to-back Detroit wins captured by F1 legend Ayrton Senna.

After a a six-year hiatus, the Grand Prix was resurrected via the efforts of Roger Penske. The city and Belle Isle played host to the American Le Mans Series and Indy Car in 2007 and 2008. Since the Grand Prix returned to Belle Isle in 2007, event organizers have made over $6 million in lasting improvements to Belle Isle.

In 2012 the Detroit Grand Prix is back. The Chevrolet Detroit Belle Isle Grand Prix returns to the Motor City on June 1-3, 2012. The event will feature the cars of the IZOD IndyCar Series, the GRAND-AM Rolex Sports Car Series, the Firestone Indy Lights Series and the Pirelli World Challenge Championship Series. The weekend collectively is referred to as the Chevrolet Detroit Belle Isle Grand Prix.

“I’m excited to participate in front of my hometown crowd," noted Nowicki. "It's also great to be a part of Team MBR and driving with Michael Baughman. Mike's a solid driver and I've got a lot of confidence in our program. I think we've got the talent, knowledge and maturity to launch a formidable attack at the Grand Am GT podium."

"You don't go racing in the major leagues without support and partners," noted Nowicki. "We're fortunate to have Matick Chevrolet, ITS Partners behind us. And personally I appreciate the support I get from Mobil 1, the leading synthetic oil producer in the world. Mobil 1 has continued to support my efforts over the past 20 years. They’ve been an active partner in my automotive business and at the track. I can't thank them enough for that support and for helping make this happen."

"In addition to Mobil 1," added Nowicki, 'we've also got the support of SKF Racing's wheel bearing division which means we'll be using the same bearings as the production Corvette ZR1. We've also enlisted the support of Design Engineering Inc. a producer of thermal materials that will help control various temps around the power-train and other heat sensitive areas during the 200 miles of intense racing."

In 1990, Nowicki stepped up to road racing, making an impressive debut winning the SSGT Regional Championship two years in a row and set new track records. He later made his professional racing debut in the International Motor Sport Association's (IMSA) Firestone Firehawk Series as a co- driver with the Billy Hagen/Gene Felton Team at Watkins Glen.

Nowicki kept driving Corvettes, Camaros and Firebirds for Hagen and Morrison in Firehawk, IMSA and Sports Car Club of America's (SCCA) World Challenge events. He placed fourth in his first-ever race for Morrison at Road America and, in 1992, Nowicki dominated the SCCA IT class and was asked to become a part of the Morrison Motorsports Corvette effort at the final 24 Hour event in the World Challenge series. In 1993, he won the SCCA IT Championship in a Corvette.