Several Rolex Sports Car Series and Continental Tire Sports Car Challenge teams enjoyed a head start at GRAND-AM’s newest venue, participating in the first unofficial test at Circuit of The Americas in Austin, Tex., site of Round 2 of the upcoming season. 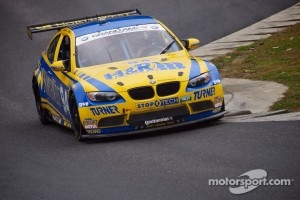 “The track is beautiful, and the circuit is amazing,” said Bill Auberlen, who tested BMWs in both series for Turner Motorsport. “It’s a real driver’s course. We’re going to see a fantastic race when we come back here in March.”

Both GRAND-AM divisions will race at Circuit of The Americas on Saturday, March 2 – the multi-million dollar facility’s first event since it hosted Formula One in its grand opening in November.

“The track has awesome potential,” said 2012 Rolex 24 At Daytona and Indianapolis Motor Speedway winner Andy Lally, who tested the No. 44 Magnus Racing Porsche GT3 in addition to the No. 48 Fall-Line Motorsports BMW M3. “It will be a good race. There are a lot of places to set up banzai outbraking passes.”

“This is a spectacular facility – like no other place I’ve seen,” said Matt Plumb, who tested with fellow five-time 2012 GS winner Nick Longhi in the No. 13 Rum Bum Racing Porsche Carrera. “The Formula One race here had some of the best racing I’ve ever seen. The track is configured so it has many passing zones and plenty of room. It should make for some great racing when we come back. It raises the excitement level, for sure.”

Highway to Help Racing will return to the Rolex 24 with the No. 50 BMW/Riley driven by 1996 Rolex 24 winner Jim Pace, 2007 Rolex 24 GT winner Carlos de Queseda, Byron Defoor and Frank Beck.

In GT, Marsh Racing is looking to make its Rolex 24 debut with the No. 31 Whelen Engineering Corvette. Joining regular drivers Boris Said and Eric Curran are Lawson Aschenbach and Brandon Davis.

Racers Edge Motorsports returns with its No. 78 Mazda RX-8 with an all-Mexican lineup. The team is looking to run the full season with Martin Fuentes and Ricardo Perez, who will be joined in the Telcel/Benotto/Hublot/Under Armour entry at the Rolex 24 by NASCAR Mexico driver Carlos Peralta and Rudy Camarillo.

Napelton Racing will make its Rolex Series debut in the new GX class with the No. 16 Porsche Cayman. Veteran Shane Lewis will lead the driver lineup, with his co-drivers to be announced in the near future.

The next official on-track activity for both the GRAND-AM Rolex Series and Continental Tire Sports Car Challenge will be the Roar Before the Rolex 24 test at Daytona International Speedway on Jan. 4-6.