AUSTIN, Texas (March 2nd, 2013) - Multimatic Motorsports rose to a host of challenges in a weekend that saw one car withdrawn before practice even started and its Daytona podium finisher suffer electronic problems that took it out of contention during the first few laps of the race. A technical non-compliance caused by an error during the car build in England resulted in the #16 Aston Martin Vantage of Nick Mancusso and Frankie Montecalvo being permanently parked by Grand-Am on Thursday morning. This car had been flown to Florida from England the day before the Daytona race practice in January and the non-performance related issue had been missed by both Multimatic and Grand-Am in the run up to its excellent fourth place finish in its debut event. Aston Martin Racing has pledged to have the car sorted for Multimatic well in advance of the next event at Barber Motorsports Park which was of no conciliation to the nascent driver pairing of Mancuso and Montecalvo who frustratingly watched the Austin event from the sidelines. 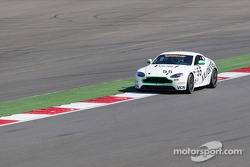 The pole winning number 55 Aston of Maxwell and Buford.Despite this major setback the team persevered and the remaining three entries were always near the top of the timesheets through to qualifying where Jade Buford made it two poles in a row for the Multimatic #55 Vantage. Although out dragged at the green by the mighty power of the #01 Camaro, Buford slotted in behind the Chevy and the two leaders proceeded to pull away from the field through the first phase of the race. Michael Marsal in the #71 and John Farano in the #15 immediately started a climb through the field, ultimately running nose to tail until the latter reported that he had lost power and was having to dive for the pits only a handful of laps into the race. The ensuing sequence of events resulted in his driving partner David Empringham falling off of the lead lap and finishing the race a distant 22nd in class. The 5th place finisher, number 71 Aston Martin of Kasamets and Marsal.Marsal put in a stellar shift handing off to Tonis Kasemets at the first caution period, who then proceeded to drive an inspired race to finish 5th, the team's best placing on a day when the competition was fierce and the #96 BMW of Bill Auberlen was untouchable, turning a race best lap a full second faster than the rest of the field. Scott Maxwell took the #55 from Buford at the first caution and battled in the top group throughout the remainder of the race, always in contention for the podium even as alternative strategies mixed-up the order in the middle hour. However, it all went wrong just a few laps from the end when the #9 Camaro of Matt Bell got sideways at the front of the tight 3rd through 7th group and Maxwell dove to the inside to take advantage only to meet with contact in the scrum. Grand-Am deemed the ensuing mayhem to be the Multimatic driver's fault and a 60 second stop and go penalty dropped the #15 to a lowly 18th at the end. Highlights of the weekend were as follows:

With Montecalvo/Mancuso only able to watch from the sideline, qualifying transpired to be a fraught fifteen minutes as Grand-Am race control surprisingly initiated a stringent new standard for course cutting that resulted in no less than 20 top five lap times being excluded, including Buford's first two fliers and all but one of Farano's qualifying efforts. As there was no warning of the new criteria and no detailed explanation of the resulting infractions it was a testament to Buford that he drove the most conservative lap that he could and grabbed his second pole in a row for the #55 car just as the session ended. Marsal and Farano ended a frustrated 11th and 17th respectively with none of the Multimatic drivers really understanding what Grand-Am was penalizing them for.

Empringham and Ferano's Tower Events Aston Martin at Austin.The race started well with all three Multimatic Aston's showing good pace and Buford in the #55 stuck to the bumper of the leading CKS Camaro as they pulled away from the field to a comfortable eight second margin. However, it was only a half a dozen laps in that Farano reported that his engine had gone flat and was heading for the pit box. The team quickly reset the ECU and sent the #15 back into the fray but it was forced to run through the lane again due to a speeding infraction on the first visit at which point Farano fell back to just 15 seconds ahead of the two leaders. In anticipation of a yellow flag period the team chose to stop the car again just after the 30 minute mark for a full service and driver change to Empringham, counting on the wave-by when the leaders stopped under caution. The caution ultimately did come 20 minutes later but not all the leaders stopped and Empringham was caught a lap down, never able to recover; an illustration of how competitive the series has become, that even a small problem cannot be salvaged. Both the #55 and #71 took the first yellow with the majority of the field and changed drivers and fuel with the former also opting for four tires while the #71 did not. With the balance of the pack stopping under a second caution at lap 25, Maxwell and Kasemets cycled up the order to compete in the leading pack. With the race heading towards 55+ laps with most cars capable of 25 on a full fuel load it appeared that everybody would still need to take on fuel and the Multimatic engineers chose to stop the #55 and #71 just as they entered their finishing fuel window, under green with an hour to go. This coincided with the Auberlen BMW and #13 Rum Bum Porsche making identical moves.

As the race wound down Auberlen started to pick-off the guys that had not stopped and ultimately pulled away from the field while a gaggle of six cars fought it out behind him. Maxwell tried every trick in the book to get past the rabid crowd but two more yellows slowed his progress and allowed the gamblers to be able to make it to the finish. Meanwhile the #71 of Kasemets closed in on the same battle having had to make up time after taking tires at the last stop. Just as he got to the battle a few laps from the end Maxwell and the #9 Camaro exited in a cloud of dust and Tonis found himself in fifth while his teammate was called to the sin bin for a full minute. A totally exciting on track squabble for the fans but not the outcome that the Multimatic team was looking for, although Kasemets' and Marsal's steady drive gave the #71 a solid top five finish.