Rob Huff and Marc Basseng eighth and ninth on the Sonoma Raceway in California.

Friedersdorf/Sonoma (rol/ot) The German Team ALL-INKL.COM Muennich Motorsport from Friedersdorf got their aimed for point rankings at the ninth season event of the FIA World Touring Car Championship (WTCC) in the USA in the night to Monday (CET, 9th of September).

On the Sonoma Raceway, in the correspondent valley between San Francisco and Sacramento in California, the British Rob Huff on eight and Marc Basseng two times on position nine finished in the top ten with their Seat Léon in the season runs 17 and 18. 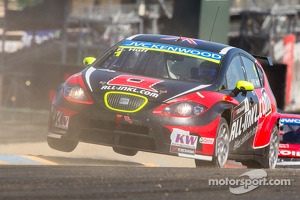 René Muennich (both Neusalza-Spremberg), team principal and owner of the racing stable from Saxony, finished on position 23 and 19 in the third Seat Léon. Winners of the races have been the British Tom Chilton (Chevrolet) and the Italian Gabriele Tarquini (Honda).

At the first race on the 4.032 km long track, Marc Basseng made up two positions right after the start coming from ten in the midday heat of more than 30°C on Sunday (8th of September, local time). But at the head-to-head duels in the middle of the field in lap three, he lost one position again.

After about half of the race, the GT1 world champion was very close to his team colleague Rob Huff on position seven, but wasn’t able to pass. The acting Touring Car world champion from Great Britain lost one position himself three laps before the end of the race and finished on eight.

Season run 18 started more promising for ALL-INKL.COM Muennich Motorsport with Rob Huff on third position, which he only kept until the second lap though. After a slight touch with a combatant, the valve bonnet of his front tire was ripped of and Huff had to drive into the pit to get a new tire.

"The setup changes didn’t pay off unfortunately, but we scored some points again at least", Marc Basseng explained. He is on overall ranking 13 at the moment.

"That has been a decent start into the last season third by our team as the newbie at the Touring Car world championship", René Muennich said, whose racing stable remains on third position at the team world championship (Yokohama Teams' Trophy). "It’s really sad that Rob had bad luck in the second race."

And the team manager Marc Basseng added: "The extreme heat was really tough for the Seat, because the car is too old and slow bay now. Now it will get harder for us. But we are still learning a lot and René did a good job again." The race in the USA has been a great experience anyway. "It was great fun on this beautiful and challenging track", Marc Basseng said.

The tenth season event of the WTCC is scheduled for the 21st/22nd of September with the runs 19 and 20 in Suzuka (Japan).