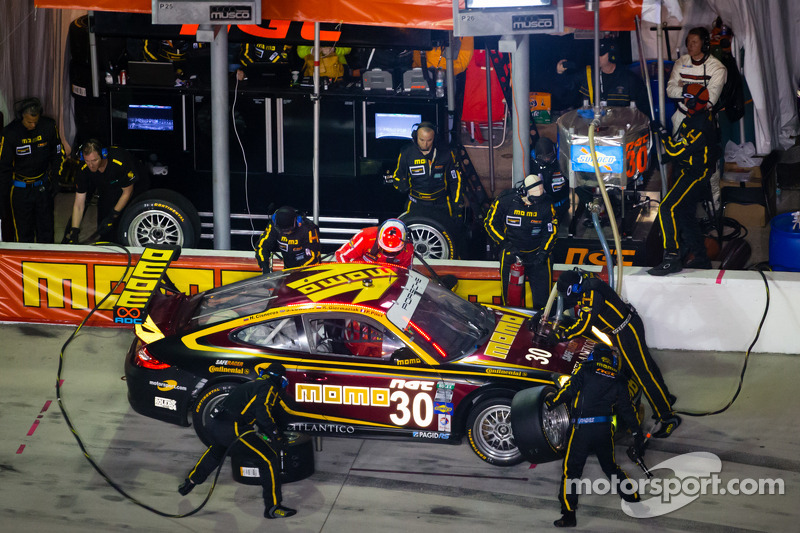 MOMO NGT drivers continue to battle for GT victory in their Porsche GT3.

At the 12-hour mark of the Rolex 24 AT Daytona race, the No. 30 MOMO NGT Motorsport Porsche GT3 car of Henrique Cisneros, Sean Edwards, Patrick Pilet and Kuba Giermaziak continued to stay at the top of the time charts in the GT class since the 6-hour mark. 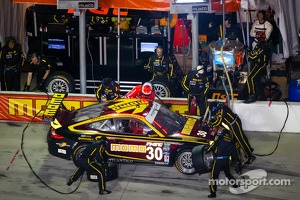 Driver rotation has been consistent, with Kuba as the driver at the 6-hour mark and he elevated the car to second place. He returned the Porsche to MOMO starting driver Sean Edwards, who again climbed back into first position and held it until just after 1:00 a.m., when Patrick Pilet took over and kept the GT3 Porsche in the Top Five. Henrique Cisneros was piloting his second stint of the race at halfway.

Kuba Gierzmaziak, driver No. 30 MOMO NGT Motorsports Porsche GT3: “The stint was quite difficult. I didn’t get many laps before the race to be honest. It was also my first time on the new Continental tires. I think it was okay though.

On the second stint I made a mistake on the pit exit (speeding in the pits) and we got a drive through penalty, which was a shame, but luckily there was a local yellow and we got the pace back. At the moment, we are definitely running in the Top Five. It’s only eight hours into the race so it’s all about staying on the lead lap, keeping it calm. None of us are really over pushing it. We’re trying to keep it safe I think it’s working out well. We are all doing quite a good job. Let’s see if we can keep it up for 24 hours.”

Sean Edwards, driver No. 30 MOMO NGT Motorsports Porsche GT3: “I had a great stint! The car was amazing. I came out in third place and managed to jump one car from the pit, and then I got the 44 Magnus car on the restart so I already managed to pull a gap from the Ferrari in P2. It was quite a straightforward stint. I could just put my head down. The car was fantastic all the way through the stint. Sometimes it was a bit like driving a race on your own out there because there we’re many cars. It was quite nice and good fun. It was a great stint and we look in good shape. There’s still 14 hours to go, so we’re not even to the end of the race yet. We’re a strong team though and hopefully we can keep it in shape for the last four hours and then we can really attack the race.”

Patrick Pilet, driver No. 30 MOMO NGT Motorsports Porsche GT3: “My stint went quite well. I was fighting for the first position during all my stints. Some of the drivers are really aggressive now on the track, especially the Audi drivers. They are looking like it is a sprint race. Anyway, it was okay. The car is really good. We have no problems. The brakes are excellent actually. We are on a good pace until the end. I think we need to keep this pace and just wait for others to have problems, and we continue like this. We need to try to stay between the two white lines. That’s the most important thing, and do not break anything on the car and I think we have a good chance.

“The traffic is quite difficult and a bit strange because there are many times we are overtaken by a Porsche car. I think we need to communicate a bit more, just so there is less traffic between all the cars from the same manufacturer. I had some traffic. Sometimes you get three or four cars in a row and you lose a lot of time, and sometimes it is quite clear for 50 minutes so we will just keep pushing and stay out of trouble.”