Lexington, Ohio. The Diamond Cellar Classic, Round Six of the GRAND-AM Rolex Sports Car Series, marks a return to the series for one Porsche customer team as well as two past champions. Snow Racing with Wright Motorsports chose the Mid-Ohio Sports Car Course to run its second race of the season after opening the year at the Rolex 24 At Daytona in January. 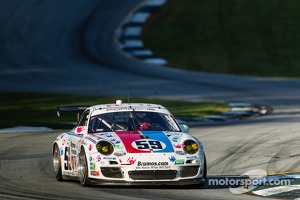 Additionally, the longtime pairing of 2011 GRAND-AM GT Champions Andrew Davis (Athens, Ga.) and Leh Keen (Charleston, S.C.) made their comeback, albeit on separate teams, after a one-race hiatus. In all, four Porsche customer teams qualified in GT class today for the June 15th race at the Lexington, Ohio-facility.

Qualifying ninth was the No. 18 Muelhner Motorsports America Porsche 911 GT3 Cup car of Dion von Moltke (Coral Gables, Fla.) with a time of 1:24.652. von Moltke is a regular in the car but this weekend will be joined by Keen. Keen, an accomplished driver and co-champion with Davis in the GRAND-AM GT class, returns after a one-race break.

He and Davis began the year with Brumos Racing. However, following Round Four at Road Atlanta the legendary team mothballed its program for the short term. The longtime driving duo each found new opportunities for Mid-Ohio.

Davis’ opportunity came as a result of the return of Snow Racing with Wright Motorsports to the GRAND-AM Rolex Sports Car Series this weekend. The veteran’s experience and coaching is valuable asset to his young standout co-driver, Madison Snow of Lehi, Utah.

Snow, is still in high school but is already on the “watch list” of young racers owed to his experience in the IMSA Porsche GT3 Cup Challenge and other Porsche one-make series. Snow qualified the No. 62 Porsche 911 GT3 Cup car 10th on the grid with a time of 1:24.933.

“I am absolutely thrilled to have this opportunity to drive with Snow Racing/Wright Motorsports in the UIS No. 62 Porsche,” enthused Davis. “It means a lot to me to be back in the Rolex Series with a three-race deal to run with these guys. We’ve been tweaking on the car all day to get it ready for tomorrow but to also give Madison a chance to get his feet under him in the Rolex Series.

He’s done a superb job. Qualifying was his quickest time of the day. Tomorrow is going to be a long race but we have a good car and a good team.”

Magnus Racing is currently ranked second in the GRAND-AM team point standings with owner/driver John Potter (Salt Lake City, Utah) and Andy Lally (Dacula, Ga.). However, the team will start shotgun on the field after qualifying with a 1:24.987 lap.

The No. 57 Stevenson Motorsports Chevrolet Camaro driven by John Edwards set the GT class pole position time with a lap of 1:22.957 seconds. The No. 31 Marsh Racing Chevrolet Corvette of Boris Said followed closely behind to take second on the grid.