September 27, 2013 (Lime Rock, Conn.) In what will be the final Grand-Am race weekend in history, Mazda is set to win at least one manufacturers championship as well as a clean sweep of the Grand-Am and Continental Tire Rookie-Of-The-Year driver awards.

When the green flag drops on the Saturday afternoon Rolex Grand-Am race, Mazda will officially secure the GX Manufacturers championship with the all-new Mazda6 SKYACTIV-D Clean Diesel. The team will be seeking to add the only item missing from their season, a 1-2 finish. The SpeedSource Mazda team has scored eight straight wins, but has yet to score the perfect team finish. Joel Miller, co-driver the of The #00 VISITFLORIDA.com Racing Mazda6 has locked up the Rookie-Of-The-Year title having co-driven to five race wins. 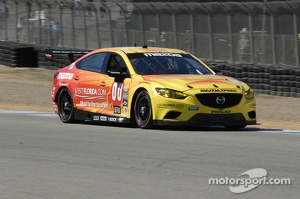 In the Friday afternoon Continental Tire Challenge ST race, it will be an all-out battle between Mazda and BMW. The three Mazda teams; CJ Wilson Racing, i-Moto Racing, and Freedom Autoport have combined for five wins from the first 11 races. Going into the final race Mazda is just seven points behind BMW. Mazda will need to win the race with BMW finishing fourth or worse to win the title. Stevan McAleer, driving for CJ Wilson Racing has already clinched the Continental Tires Rookie-Of-The-Year title.

“2013 has been a great year, powered by a total Mazda team effort across multiple series. To win eight straight races with our all new SKYACTIV-D program exceeded our most optimistic expectations. To have the potential of winning both the GX and the ST championships is very special. Having multiple top teams supporting us all year long is crucial as the competition is fierce,” noted John Doonan, Director, Mazda Motorsports, Mazda North American Operations.

The all-new SKYACTIV-D Clean Diesel engine in the all-new Mazda6 is a true production based engine. The engine is 51% stock by parts count, and 63% stock by weight. Mazda chose this path as it is the most honest way to demonstrate the quality, durability, and reliability of Mazda cars.