Altamonte Springs, FL – Motorsports has always been a fast paced world, and in order to succeed within the industry, drivers and teams have to adapt to whatever circumstances that are thrown their way. That is exactly what Matt Bell and the #9 Stevenson Motorsports had to deal with when a fuel leak sparked a fire in the front end of their Chevrolet Camaro GS.R Wednesday afternoon. It was then that both the Stevenson Grand Sport and Grand Touring crews worked together to completely rebuild the Camaro from the firewall up to the front facia. 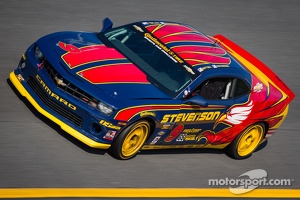 “Huge thanks to the team for taking the time and working hard to rebuild this car,” Bell stated. “Not only did the GS team work extremely hard but the GT team chipped in as well. Everyone barely made the team meeting because of their of their valiant efforts.”

Bell’s racecar was ready to compete mid-day on Thursday for GRAND-AM Continental Tire Sports Car Challenge Grand Sport qualifying. The California native was able to pound out two qualifying laps before the session was cut short due to a black flag situation. He would be gridded eighth for the 2013 BMW Performance 200 Friday afternoon.

The green flag flew at approximately 1:45 PM local time signaling the start to the BMW Performance 200 and the start of Matt Bell’s 2013 CTSCC season. The road-racing veteran held steady in the Top-5 for a majority of his stint and even took over the lead during the latter part of his stint. When it came time to pit for tires, fuel and a driver change, Bell brought the car in with the overall lead. Bell’s co-driver John Edwards took over and followed in his teammates footsteps. After the two and a half hour battle, Bell and his team captured a Top-10 with a sixth place finish.

“We were the best we have been here at Daytona, but it is very hard to compete with cars that just have higher straight line speed than you” Bell stated. It is much easier to pass someone with your foot pressed to the floor than it is to outbreak someone. Hopefully some changes will be made before the next round. We made sure that we kept one step ahead of the track conditions, as we knew it would be changing constantly throughout the event. All in all, it was a good way to start the season and I’m looking forward to driving these great Stevenson Camaros all year long!” 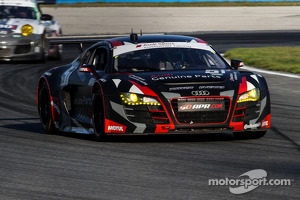 For Bell, the rest of the weekend would be dedicated to the 51st running of the Rolex 24 at Daytona. In the 2013 edition of the most prestigious sports car racing event in North America, Bell would be driving the #51 APR Motorsport Audi R8 Grand-Am. While Bell had multiple starts in the Rolex 24, this would be his first in an Audi. “It’s an exciting opportunity,” Bell stated. “I have hundreds of hours in street Audis on a race circuit, but never a race prepared Audi R8 under race conditions. To be at the Rolex 24 with a great team in APR and with a manufacturer like Audi is certainly exciting and another chance for me to grow within the sport.”

As the week progressed from the Wednesday promoter test day to the green flag on Saturday, Bell learned an extraordinary amount of information and used his engineering background to optimize the performance of the Audi R8, and to provide extensive feedback to the team. Qualifying on Thursday was a chance for Bell and his team to attempt different setups and changes within the car. Having that knowledge allowed the team to set up a strong car for the green flag on Saturday at 3:30 PM local time.

Bell took the green flag to begin the 51st Rolex 24 at Daytona from the back half of the field, but as media and fans watched from every angle of Daytona International Speedway, it could be seen that he intended on driving fast and steady laps without getting himself or his team in trouble. The veteran slowly worked his way through the field, and as he came in for a pit stop to refuel, he was shown 19th in the GT Class running order.

“The car was getting better as a stint progressed” Bell mentioned. “Unfortunately, we were a bit down on power compared to the other Audi R8s in the field, but I was able to make up some positions as my stint continued on. I am able to make moves in the corners but other GT cars would just pull away from me down the straights.” The #51 Audi R8 would be a fixture within the Top-20 in class for the next group of double-stints before some setbacks in straight-line speed hindered the groups progress through the field. Bell re-entered the Audi at about 4:00 AM local time looking to make up some laps and positions on the GT field.

The 27-year old’s last stint began at about 1:30 PM local time, where he was asked to bring home the #51 with the highest finish possible. Having already set the team’s fastest overall lap of 1.49.992 seconds, Bell earned the opportunity to take the checkered flag. He continued on his quick pace to bring the car to the checkered flag in 12th position in GT without suffering any severe incidents throughout the twenty-four hour race.

Being the consummate professional that he is, Bell took the time to explain what the #51 team had accomplished for running the 51st running of the Rolex 24 at Daytona. “For any car to endure twenty-four hours of nonstop racing is an amazing accomplishment. The team worked very hard throughout this entire process and was an intricate part of our accomplishment. We suffered some challenges throughout the event. At hour three the gearbox began giving us some fits, but we were able to work through them as a team. For this car to finish in the 12th in class out of a starting field of thirty-three is an incredible accomplishment. I was honored to have the opportunity to cross the checkered flag in a Rolex 24 at Daytona, and that moment is something I will keep with me, to think back to, as I continue to build my resume. I’m very proud of everyone on this team!”

Miller Racing finishes in top-10 at SCC opener in Daytona