Entering today’s two-hour and 45-minute race on the Monterey Peninsula, Magnus Racing was a single championship point behind the No. 63 Scuderia Corsa Ferrari 458. The driver pairing of Andy Lally (Dacula, Ga.) and John Potter (Salt Lake City, Utah) had led the point championship for most of the season in the No. 44. Knowing that a win was essential for their championship aspirations, the Utah-based program used the speed and efficiency of its Porsche, matched to intelligent driving and daring pit strategy to take the lead and gap the field in both the race and the title chase. On its first pit stop, the Magnus Racing crew gained four positions to take valuable track position and then used excellent fuel mileage to capture their first win of the season. The victory also gave the Porsche marque its first win of the year in GRAND-AM and gave Magnus a 13 point lead going into the last race on the schedule. 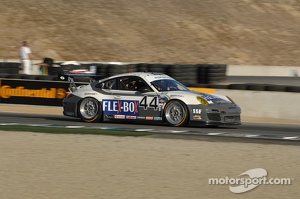 “I can't tell you how great today was for everyone,” enthused Potter after the race. “Everything just came together perfectly and it's because of the incredibly hard work that the entire team has put in to this. Great strategy, perfect pit stops and a great drive by Andy just made for an outstanding day. There's still a lot that can happen in Lime Rock, but we're in as good a position as we could have asked for.”

Lally continued: “Today was once again a total team effort. Lars [Giersing, team engineer] made a bold call that worked perfectly and the guys gained us four spots in one stop. Just an epic day for the entire team. We have no idea what to expect in Lime Rock, but having a small lead is going to be very helpful.”

Magnus was not the only Porsche finding speed in California. Entering the last stint of today’s race, Porsche factory driver Patrick Long (Playa del Rey, Calif.) found himself fighting for fourth-place within sight of the class leader. A caution period slowed the field with ten minutes remaining bringing the GT field closer together. When the green flag waved for the final time only four minutes remained on the clock and Long put full pressure on the No. 63 Ferrari. Entering turn one on the white flag lap, Long passed the Ferrari to move up to fourth in the No. 73 Park Place Porsche he shares with Patrick Lindsey (Santa Barbara, Calif.). The pass benefited not only Park Place, the racing arm of one of the country’s largest Porsche dealers, but also the winning Magnus Racing entry, by dropping its key championship rival one additional position.

“A fourth-place is good for us and great for Porsche manufacturer points,” said Lindsey. “We had good strategy but the yellows at the end of the race didn’t fall our way. I am super proud of the guys and how they executed on pit road. Pat Long obviously drove a fantastic final stint. He had to get into the car early due to the timing of the first caution but he held on and drove great. We had a very fast car today. We’re glad we got a top-five for the Children’s Tumor Foundation and everyone at Park Place back in Dallas.”

“It was pretty eventful there at the end,” reflected Long. “It was a really good day for Porsche. I think we had a car to race at the front but the yellows didn’t go our way. In the end, it was a great day for our sister car at Magnus. If it’s not us, the first ones we hope have a great day is the 44 so congratulations to them. My race was pretty straightforward. We had great balance in the car, and at the end it was like short track racing. Everyone was out of tires and just sort of muscling around. I was able to get around the 63 on the final lap. We just ran out of time today but I am very proud of the Park Place guys.”

2012 Porsche Young Drivers Academy graduate Kyle Marcelli (Canada) and Brian Wong (Newport Beach, Calif.) were making their first appearance together in GRAND-AM today in the No. 18 Muehlner Motorsports America Porsche 911 GT3 Cup car. The program rallied from sitting out the Kansas round of the championship to finish eighth in GT class at MRLS.

A second Park Place-entry, the No. 71 of Charles Espenlaub (Lutz, Fla.) and Charles Putman (Mills, Wyo.), finished 11th in class.

The GRAND-AM Rolex Sports Car Series will come to a close at Lime Rock Park in Connecticut on September 28. With today’s victory, Porsche is now two points out of the Manufacturer Championship lead. Ferrari will enter the final race with 336 points to Porsche’s 334. Chevrolet trails in third with 303. A victory in GRAND-AM pays 35 points, second place 32 towards both team and manufacturer standings.

The race will mark the final GRAND-AM event in history as the series merges with the American Le Mans Series in 2014 creating United SportsCar Racing (USCR) under the International Motorsports Association (IMSA) banner.