Lexington, Ohio – Sometimes all you need is a little bit of luck and that’s exactly what Luis Bacardi’s Rum Bum Racing got in Saturday’s Diamond Cellar Classic as the team scored lucky number win 13 in the No. 13 Rum Bum Racing Porsche. 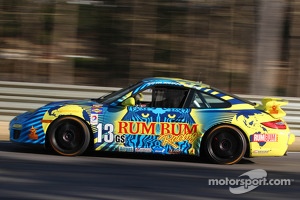 The usual shrewd strategy from the Rum Bum team as well as perfect driving by drivers Nick Longhi and Matt Plumb propelled the No. 13 machine to the front of the 56-car combined class GRAND-AM Continental Tire Sports Car Challenge field.

But as fuel strategy came into play late in the race, it was a lucky full course caution with under 10 minutes remaining that sealed the deal for Rum Bum Racing to take their second win of the season.

The result marked a return trip to the Mid-Ohio podium as Plumb and Longhi finished third in last year’s event on their way to claiming the 2012 GRAND-AM Team Championship Title.

Longhi opened the race from the fourth row after having qualified the No. 13 Porsche eighth on the grid. He ran a very strong opening stint – moving up to fifth on just the first lap.

He continued to move his way forward to run as high as second before a brilliant call from the Joe Varde-led Rum Bum squad saw the No. 13 take its first pit stop immediately prior to a full course caution about an hour into the race.

“The first time I got in the car was yesterday and I actually, quite frankly was feeling terrible,” said Longhi. “I had a long travel day on Thursday and missed the promoter test day and had a migraine yesterday so definitely wasn’t feeling on top of it and the car was new to me. But this morning I woke up feeling better.

This is a strong team. I knew on the start I had to make up for lost time and I got a couple of guys, which was great. It just went really well. We also had a bit of a radio issue, but fundamentally we made the right call at the right time to pit and we were able to get in at the right time.”

A quick, efficient pit stop by the Rum Bum crew saw Plumb return to the track sixth in the order for the restart, and he wasted no time in moving forward, making it look easy as he maneuvered his way up into the second position in just a matter of laps.

When the third of four cautions was displayed on Lap 50 with about 45 minutes remaining in the race, the leader headed down pit lane, but the Rum Bum team took a gamble and kept the No. 13 Porsche out on track in hopes that another full course caution would give them the necessary fuel mileage to make it to the end.

Plumb restarted at the point and led for 31 laps defending against the hard charging No. 96 BMW of Bill Auberlen. As the laps waned, so did the fuel in the No. 13 machine. The team knew it would be very close on fuel in order to make it to the finish, but with less than 10 minutes remaining in the race, a full course caution was displayed and the Rum Bum team breathed a collective sigh of relief – knowing that Plumb would indeed make it to the checkered flag on the amount of fuel in the car.

However, the caution also set up a two-lap dash to the finish with a bevy of hungry GS machines also pursuing the victory behind the No. 13 Rum Bum Porsche. But Plumb once again kept his cool behind the wheel as he brought the No. 13 Porsche across the finish line first with a .452-second advantage.

“It was perfect! We got so lucky there at the end,” said Plumb of the win. “Once again ‘Lucky 13’ came through at the end for us. We were spot on from the beginning to the end. We only did one set of Continental Tires and they were just so consistent throughout the whole run. I’m sorry Luis Bacardi couldn’t be here today but hopefully we did well for him.”

“It’s crazy, congratulations to everybody in this field,” added Longhi. “The level of driving and preparation in the Continental Tire Challenge is fantastic. It’s just such a privilege to be here. With that said, I personally didn’t do what I needed to do in qualifying but hopefully I made up for it today and just handed the car off to Matt in a good position. I’m calm because, I keep saying it over and over again, this is the best team I have ever worked with. It’s mind-blowing.”

The victory extends Rum Bum Racing’s championship lead to an 11-point advantage as the team returns to race action at Watkins Glen in two weeks to defend their 2012 win at the Upstate New York road course.

Action Express grabs their first win of 2013 at Mid-Ohio