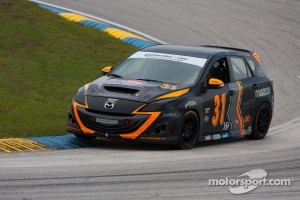 In the end, that battle was decided by a scant 0.422 seconds with Kleinubing taking the race victory for himself and co-driver Jayson Clunie ahead of Lally. And as a result, Kleinubing took the 2012 ST championship by three points over co-drivers Derek Whitis and Tom Long and four points over Lally.

The two-hour and 30-minute race at the 1.53-mile Lime Rock Park circuit was run almost entirely under wet conditions, and featured a seesaw battle for the race and the championship.

It appeared for much of the race that Whitis and Long – who entered the race with an 11-point lead over Kleinubing – would have enough to take the title. Whitis led 12 laps during his opening stint and Long was in position to secure the title with a top-six result heading into the final hour. However, the No. 25 Mazda/SemperFiFund.org Mazda MX-5 faded over the final 45 minutes to a 10th-place finish.

The No. 25’s misfortune set up the duel between Kleinubing and Lally. Driving the No. 31 Cybernation/i-Moto/Mazda/EMI Mazdaspeed 3, Kleinubing held a seemingly comfortable lead with 10 minutes to go, but the racing line continued to dry with every passing lap, and Lally used every inch of it to take chunks out of the lead. With less than five minutes to go, Lally’s No. 10 Infinity Audio/Kia Motors America/Rocky Tools/DonorsChoose.org Kia Forte Koup was right on Kleinubing’s rear bumper.

Lally – who would have claimed the title by two points over Kleinubing, Whitis and Long with a victory – did all he could to find a way past Kleinubing but he couldn’t get quite close enough and Kleinubing took his first Continental Tire Sports Car Challenge championship. It was also the first team title for i-Moto Racing.

“It was a tough battle out there, but if you want to earn a championship, there’s no better way than with Andy Lally and Billy Johnson behind you,” Kleinubing said. “I think we did that today. We got a little lucky with the rain. Without the rain, we’d probably be a fifth or sixth-place finisher.”

Jesse Combs – who came into the race with a mathematical shot at the championship along with co-driver Jeff Mosing – led 35 laps early on in the No. 56 Coolgas Inc./Frank’s International BMW 330i, but an incident in Turn 1 while attempting to pass a lapped car on Lap 47 removed them from contention. Nevertheless, BMW did take the 2012 ST Manufacturers Championship by five points, 308-303, over Mazda.