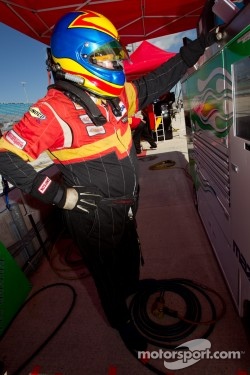 “I first raced at Detroit back in 1984 at the original downtown Grand Prix circuit,” Nonnamaker said. “I was competing in the Champion Spark Plug Challenge Racing Sedan Series. That was very exciting as the series was supporting the Formula 1 race. It was very interesting as the series was paddocked next to Cobo Hall arena where the Detroit Red Wings play. To even get to the track, we had to drive our cars down a side street, and go out onto the track at turn 7 or so. Then we would drive down to the pits. We had built a Nissan Stanza, that had took over a year to build. And of course like any crazy, insane racer, I choose to debut the car at Detroit. As you could imagine, the race did not go so well for us with tons of teething problems with a rookie car.” Nonnamaker further added “And actually my racing history in the area dates even further back to when I went to my first driver’s school at the Waterford Road Course, just outside of Detroit, in 1974. Now to be coming back 28 years later to race at the Belle Isle circuit is very special. From what I have seen, the setting for the event is very open and accessible for the fans, just like Montreal is. Hopefully, both Team Sahlen Mazda RX-8s can put on a good show for the Mazdafanatics in the ROLEX GT class.”

Team Sahlen is on quite a roll in the ROLEX series for 2012. For the 4 events to date, the team has led in 3 those events, with a strong 2nd place podium at Homestead as the top result.

One of the key reasons for Team Sahlen’s success has been the solid driving efforts by Dane Cameron. Dane shares his thoughts – “I am very excited for Detroit, I absolutely love street courses. I have never done a street course in a GT car so I am looking forward to seeing what it is like not being able to see the front wheels! For me Detroit poses a bit of an unknown as this most recent generation Rolex GT cars have not been on a street course, so I think the race is wide open. Also almost none of the drivers have ever race the Belle Isle course before so it should be a very even playing field for everyone which will be sure to produce an exciting race.”

Co-Driving with Dane will be Wayne Nonnamaker, the 2011 Grand American GT Class Bob Akin Sportsman Winner. – “It will be very interesting at Detroit. It is a new circuit for everyone, so whoever learns the track the quickest will most likely be the ones at the sharp end of the grid.