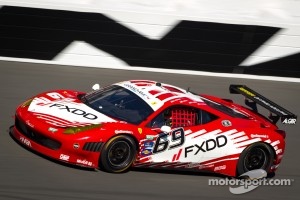 DAYTONA BEACH, Fla. (January 13, 2012) – Jeff Segal and AIM Autosport Team FXDD moved off to a quick start in the first official on-track event of the 2012 GRAND-AM Rolex Sports Car Series season last weekend at Daytona International Speedway (DIS), January 6 – 8, where the team’s new No. 69 Ferrari 458 Italia GT Grand Am was put through three solid days of testing at the Roar Before the Rolex 24.

Segal returns this season with his longtime teammate and 2010 GRAND-AM Rolex Series GT co-champion Emil Assentato. They were joined at the Daytona test by Nick Longhi and Anthony Lazzaro who are once again entered as additional co-drivers on the No. 69 FXDD team for the 50th Anniversary Rolex 24 At Daytona later this month. The same four drivers also co-drove together in the last two runnings of Daytona’s grueling day-long race.

“We came away from the Roar Before the Rolex 24 test with even more confidence in the new car,” Segal said. “The team is learning what it takes to get the most out of the Ferrari every time we go out and this test was no exception. It was a good three days and we are looking for a solid performance in the race. All of the Ferraris look strong and we feel good about ours. I am not sure the other manufacturers are showing their hand quite yet, but it will all come out in qualifying. It’s going to be interesting.”

With the entry list at 45 cars and counting, this year’s Rolex 24 GT field could be the strongest in the event’s half-a-century history. Despite the heavy opposition, Segal believes his car, co-drivers and team are up to the challenge. The No. 69 clocked in sixth fastest overall in the GT ranks during the Rolex Roar test.

“The 50th Anniversary Rolex 24 is clearly going to be a huge event,” Segal said. “I saw more fans than ever before at the Rolex Roar test and it’s shaping up to be perhaps the best GT race in the event’s history. It’s obviously a race we want to win, and the support we have had for the effort from Ferrari and Michelotto has been nothing short of remarkable. The car gets faster and faster every time we go out, and all of our partners at AIM Autosport Team FXDD have been great to work with and fully focused on the mission.”

After racing Mazdas in the Rolex Series for the last five years, Segal’s move with Assentato to Ferrari this season takes him back to his racing roots. Segal began competing as a teenager in a Ferrari, is the youngest Ferrari Challenge race winner in series history and is also a current Ferrari Challenge driver coach. He even made his GRAND-AM Rolex Sports Car Series debut at the wheel of a Ferrari 360GT back in 2003.

"Being a part of Ferrari's return to the Rolex 24 At Daytona is very special, and I'm thrilled to be able to share a car with such a strong team of drivers like Emil, Nick and Anthony,” Segal said. “With all of the unknowns we face entering a brand new car in one of the world's toughest races, our pooled experience will become one of our biggest assets.”

Segal and his teammates all have strong Ferrari competition experience. Each participated in the team’s initial shakedown run of the new 458 Italia in early November in Italy, in addition to running in December’s open test at Daytona.

“We have a strong relationship between all four of the drivers, having run this driver lineup in the last two runnings of the Rolex 24 at Daytona,” Segal said. “We know what to expect from each other, and we are all looking for the same things from the car as we prepare for the race. I'm confident that we have the right ingredients for success with our drivers, car and team."

Next up for Jeff Segal and AIM Autosport Team FXDD is the 50th Annual Rolex 24 At Daytona, which will be run January 26 – 29.