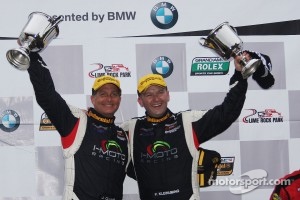 Clunie, a sophomore in the CTSCC, will return to the series full time in 2013. He will reunite with his 2012 teammate, Pierre Kleinubing. The pairing will pilot one of the teams‘ Mazdaspeed 3’s as they defend both the driver (won by Kleinubing in 2012) and the team championships.

“The whole i-MOTO team is very excited that Jayson will be returning for the 2013 season. I can’t say enough about how much Jayson impressed this team both on the track and off the track. He is a big asset to our program and proved that by capping off the 2012 season with a very strong drive at Lime Rock Park! I predict people will take notice of Jayson’s talents in 2013!” said i-MOTO team owner Glenn Bocchino.

Clunie was integral to the #31 Mazdaspeed3’s success in 2012, contributing three of the team’s podium finishes (1st at Daytona International Speedway, 1st at Lime Rock Park, 2nd at Homestead). He is thrilled to be back with the i-MOTO team for 2013 and another run at the championship.

“First of all I just want to say that I am driving race cars because of Michael Duncalfe and the team from Exclusive Management Inc. Michael has been an ever present factor and influence on my journey in motorsports - I am very proud to be an Exclusive Management Inc. driver. Signing with i-MOTO fills me with appreciation and humbles me. Being a part of this championship team gives me an opportunity to compete at the top of the sport and contend for wins and the championship again in 2013. The entire i-MOTO team is “in it to win it” and their enthusiasm and dedication is evident at all times. There is a winning chemistry with this gang and I am fortunate to be a part of it. I can’t wait to get back on track with i-MOTO and Mazda. Thank you to Michael and Glenn for putting me in this seat!” said driver Jayson Clunie.

Clunie’s manager, Michael Duncalfe of Exclusive Management Inc. commented, “I am absolutely thrilled that Jayson and Pierre will be teamed up together again in 2013 to defend the driver and team championships for i-MOTO Racing. Both drivers had phenomenal seasons and as such had many offers and opportunities to consider. The fact that we were able to put this pair back together and seal this deal is really great and speaks volumes of Glenn Bocchino and his i-MOTO Mazda program and their faith in Jayson as a professional driver. We are looking forward to a successful 2013 season.”

“I am super excited about Jayson coming back to i-MOTO in 2013. Knowing that he is my teammate every race next year makes me feel even better! We got better and better as a team last year and we are going to continue that progression in 2013. I am looking forward to even more success with Jayson! Thanks to EM Inc. and i-MOTO for making it happen again.”