The pair drove the No. 61 Roush Performance Mustang Boss 302 R in the GS class of the Continental Tire Sports Car Challenge. 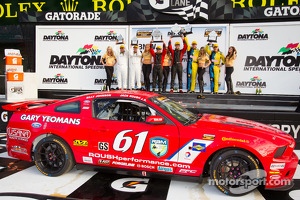 With 68 cars on the starting grid, the official kickoff for Daytona Speedweeks played out under near-perfect conditions. The No. 61 Roush Performance Mustang Boss 302 R experienced a flat tire early in the race but was able to drive back through the field. Johnson took the checkered flag 1.812 seconds ahead of second place after leading the last 70 minutes in the BMW Performance 200.

This was the team's second consecutive victory in the Continental Tire GS class at Daytona - a prelude to the weekend's Rolex 24. Roush Jr., who has co-driven with Johnson to eight wins in the series since 2009, was happy to have his father on hand during the win.

"It's so great for him to have a chance to be here considering how busy his schedule is," said Roush Jr. "It is a big deal given what he's accomplished here and to have this victory. There's a lot of internal pressure to win and perform. Bringing home a win is exactly what we shoot for."

Roush Yates Engines also performed strong at the Rolex 24 over the weekend. In one of the sport's most grueling races for a motor, the No. 60 team of Michael Shank Racing finished on the podium with their Roush Yates power. NASCAR favorites Marcos Ambrose and AJ Allmendinger were part of the third place winning team.