Tony Kanaan and Rubens Barrichello will be looking to make history at Indianapolis Motor Speedway in Friday’s Brickyard Grand Prix by becoming the first driver to win two major events in the 104-history of the speedway.

“It took me 12 years to win the Indianapolis 500,” Kanaan said. “I don’t know what to think about winning a second race. It doesn’t matter what kind of race you do in Indianapolis, any driver wants to win, no doubt about it. I know we will have a competitive car on Friday, and I’m just glad to be part of it.”

They will be joined at the race by fellow open-wheel star Sebastien Bourdais, who is seeking his second consecutive victory in the GRAND-AM Rolex Sports Car Series race. All three drivers recently landed rides in Daytona Prototypes for the three-hour race that starts at 5:30 p.m. ET Friday (SPEED, same day coverage, 7:30 p.m. ET).

Kanaan, the reigning winner of the Indianapolis 500, will drive with DTM regular Joey Hand in Chip Ganassi Racing with Felix Sabates’ No. 02 NTT DATA BMW/Riley. Barichello, the 2002 winner of the U.S. Formula One Grand Prix, will drive the Doran Racing No. 77 3Dimensional.com Ford/Dallara with Doug Peterson. Bourdais, a four-time Champ Car titlist (2004-07) and winner of last year’s inaugural Brickyard Grand Prix for Starworks Motorsport, will team with Emilio DiGuida in the No. 4 8Star Motorsports Corvette DP.

Kanaan will have the advantage of using the new 4.5-liter BMW engine. Ganassi Racing will use the new powerplant in both of its cars, beginning at Indy, while Starworks will have the new engine in the No. 2 Riley for Ryan Dalziel and Alex Popow. 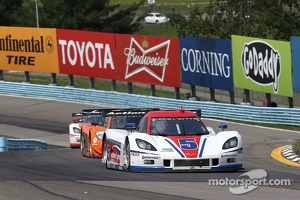 Christian Fittipaldi and Joao Barbosa are currently the hottest combination in the Rolex Series Daytona Prototype ranks. After finishing second at Belle Isle Park in Detroit on June 1, the drivers of the No. 5 Action Express Racing Corvette DP won the two most recent Rolex Series races at Mid-Ohio and Watkins Glen.

The teammates for Action Express Racing ran the opening three races of the season with different co-drivers, then finished 12th in their first outing together at Road Atlanta. The recent surge moves Fittipaldi to third in the championship – four points behind co-leaders Jordan Taylor/Max Angelelli and Ryan Dalziel/Alex Popow. Barbosa is fifth in the standings, two points behind his teammate and one point behind Jon Fogarty/Alex Gurney.

Barbosa and Fittipaldi are running 1-2 entering the final round of the North American Endurance Championship presented by VISITFLORIDA.com. Barbosa has 31 points – three more than his teammate – with Rolex 24 At Daytona winners Scott Pruett and Memo Rojas third with 25 points. Action Express Racing also leads the team standings by four points over Chip Ganassi Racing with Felix Sabates (32-28).

Fittipaldi was the Indianapolis 500 Rookie of the Year in 1996, when he finished second for Walker Racing in his only appearance in the classic. His uncle, Emerson Fittipaldi, won the Indianapolis 500 in 1989 and 1993 in addition to capturing the Formula One World Championship in 1972 and 1974.

The Brickyard Grand Prix will serve as the final round of the second annual North American Endurance Championship presented by VISITFLORIDA.com (NAEC). NAEC championship-winning teams and drivers will be crowned on the victory podium following the three-hour race on the 2.605-mile road circuit.

The NAEC encompasses the three longest races on the Rolex Series schedule, held at three of the most historic racing facilities in the world. The unique “championship within a championship” opened at Daytona International Speedway with the Rolex 24 At Daytona, moving to Watkins Glen International for the Sahlen’s Six Hours of The Glen on June 30.

The Brickyard Grand Prix winners get 20 points, with 16 for second, 12 for third and eight for the remaining finishing positions for both classes.

Starworks Motorsport Switches To BMW Power For Remainder Of Season

Starworks Motorsport – the defending winner of the Brickyard Grand Prix – will have BMW power for Indianapolis and the remainder of the 2014 season.

Alex Popow returns with Ryan Dalziel in the No. 2 Soloson BMW/Riley, while Brendon Hartley and Scott Mayer share the No. 8 entry. Popow won the Brickyard Grand Prix one year ago alongside co-driver Sebastien Bourdais.

As a result of his victory, Popow also won the inaugural NAEC championship.

· Scuderia Corsa added a second car for Indy. Dr. Rod Randall and Ken Wilden – regulars for BGB Motorsports in the Continental Tire Sports Car Challenge – will co-drive the No. 64 Ferrari 458 which will run in association with Randall Motorsports/TFR Racing. Leh Keen joins the lineup for the team’s No. 63 Ferrari.

· NASCAR Sprint Cup Series driver AJ Allmendinger is making a one-off appearance for Michael Shank Racing, co-driving with Gustavo Yacaman in the No. 6 Aero/Tuvacol/Curb Records Ford/Riley. For the remainder of the season, that seat will be filled by IZOD IndyCar Series regular Justin Wilson.

· The Brickyard Grand Prix will be Burt Frisselle’s 100th race in the Rolex Series.

Longhi and Plumb have two victories (Barber and Mid-Ohio) and two second-place finishes this season in the No. 13 Rum Bum Racing Porsche, while Edwards and Bell won at Road Atlanta among three podium finishes in the No. 9 Stevenson Auto Group Chevrolet Camaro.

Longhi is bouncing back from an injury suffered at Watkins Glen, ironically suffered in victory lane. Celebrating his second place finish during the champagne spray, a competitor slipped and fell into Longhi, spraining his right knee.

Jade Buford and Scott Maxwell are third in the standings with 139 points – 44 behind the leaders. Buford leads the series with four pole positions in five qualifying attempts in the No. 55 Multimatic Motorsports/VION Aston Martin Vantage.

Ryan Eversley and Kyle Gimple lead the Street Tuner (ST) division with 155 points, 15 more than Road Atlanta winners Terry Borcheller and Mike LaMarra. The No. 75 Familiesforhope.org Honda Civic Si has yet to win this season, but Eversley and Gimple have three podium finishes, including a second at Watkins Glen.

Blackstock is coming off a breakthrough weekend in Pro Mazda Championship race at Canadian Tire Motorsport Park near Toronto. After winning his first pole position and finishing second for the third time this season in the opening round on Saturday, he scored his first professional victory in Sunday’s race. He is currently third in the championship point standings.

Blackstock is in his third season of Continental Tire Sports Car Series competition. He scored his career-best fifth place finish in the recent race at Mid-Ohio, and led 14 laps in the most recent race at Watkins Glen.

· Indianapolis lawyer Bill Baten will be making his GRAND-AM debut in Friday’s race, co-driving with John Weisberg in the No. 40 Berg Racing Porsche Boxster.

· Ian Baas of Noblesville, Ind., will be making his Indianapolis debut in the 171 APR Motorsports Volkswagen Jetta.

· Mark Boden of Chicago is one of the CTSCC drivers who call Indianapolis their home track. Boden is coming off his first career victory, winning at Watkins Glen International.

Barrichello to drive in Grand-Am race Friday, July 26 at IMS