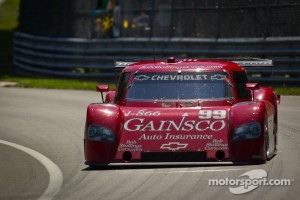 Fogarty’s lap of 1:16:504 (106.253 mph) was one one-thousandths of a second better than the laps turned by Ricky Taylor in the No. 10 SunTrust Chevrolet Dallara to make it an all-Chevy powered front row for tomorrows EMCO Gears Classic at Mid Ohio Sports Car Course. Fogarty’s track record-setting effort was his third pole of the season.

Giving Team Chevy the top-three starting positions sweep was Antonio Garcia in the No. 90 Spirit of Daytona Chevrolet Coyote.

In GT, the one-two-three scenario was repeated for Chevrolet when Ronnie Bremer put the No. 57 Stevenson Camaro GT.R on the pole. The 1:25:092 (95.530 mph) lap garnered Bremer’s first-ever Rolex Series pole and the fifth number one GT starting position for Stevenson Motorsports this season.

Starting second will be Boris Said behind the wheel of the No. 31 Marsh Racing Corvette with Dan Herrington in third in the No. 07 Banner Racing Camaro GT.R.

“Team Chevy started with season finale at Mid Ohio with great qualifying efforts in both the Rolex Daytona Prototype (DP) and GT (Grand Touring) classes,” said Jim Lutz, Grand-Am Program Manager for GM Racing. “It was a Chevrolet 1-2-3 sweep in both classes with Jon Fogarty put the No. 99 GAINSCO Chevrolet/Riley on the pole in DP for the second consecutive race and Ronnie Bremer taking the GT top-spot in the No. 57 Stevenson Camaro GT.R.

"Tomorrow's race will be a both exciting and tension-filled as our Chevrolet teams compete for three championships and bragging rights in the off-season.

Tom Dyer put forth a best-in-class Chevrolet qualifying effort in the Continental Sports Car Challenge Grand Sport (GS) with a lap of 1:31:470 (88.868 mph) to start third in tomorrow’s race behind in the No. 01 CKS Autosport Camaro GS.R.

Lutz concluded by saying: "In GS qualifying, congratulations to Tom Dyer put the No. 01 CKS Camaro GS.R in the third starting position for the final race."